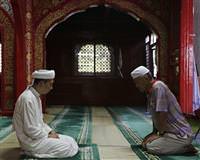 Hundreds of Muslims in a northwestern China village trying to prevent the demolition of their mosque clashed with police, causing several deaths.

A Taoshan resident told Reuters he was away at the time of the clash, but that his relatives in the town believed five people, including one of their relatives, had been killed.

The resident, Jin Haitao, said villagers believed the dead included another two elderly woman, a young man and two people from nearby areas.

Residents of nearby areas complained that telephone links with Taoshan had been cut, making it impossible to verify what had happened.

"They were just trying to hold a religious activity but the authorities would not allow it. They demolished the mosque and now they've covered over the ground, because there was so much blood on the ground," Jin said.

A man who answered the telephone at a police station in the nearby town of Hexi said an incident had occurred with Hui protesters, but he gave no details. Calls to the public security bureau in nearby Tongxin county went unanswered.

A small business owner in Tongxin, three km (two miles) from the mosque site, told Reuters that the village had been sealed off.

"It's ridiculous, I am a Muslim, and Muslims need a mosque. They are just ordinary people, coming together for religious purposes, not to overthrow Communist Party rule," the man said.

China has experienced sporadic unrest among its Muslim minorities, most notably involving the Uighurs, a Turkic language-speaking people native to the country's western Xinjiang region.

There are about 10 million Hui in China, making them the country's largest Muslim group. In many parts of China, the Hui have blended in with the predominant Han Chinese culture, all but abandoning Islam except for some traditions, such as circumcising male children and avoiding pork.

But ethnic tension has led to some unrest. At least seven people were killed in the central province of Henan in 2004 after a car accident involving an ethnic Han Chinese and a Hui sparked rioting.

In 1993, a cartoon ridiculing Muslims led to police storming a mosque taken over by Hui in northwestern China.

Uighurs in Xinjiang rioted against Han Chinese residents in 2009 and at least 197 people were killed, according to official estimates.

China's ruling Communist Party says it protects freedom of religion, but it maintains a tight grip on religious activities and allows only officially recognized religious institutions to operate.