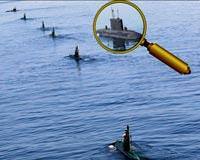 Iran threatened on Tuesday to take action if the U.S. Navy moves an aircraft carrier into the Gulf, Tehran's most aggressive statement yet after weeks of saber-rattling as new U.S. and EU financial sanctions take a toll on its economy.

The United States dismissed the Iranian threat, saying it was proof that sanctions imposed over Iran's nuclear program were working. The Pentagon said it would keep sending carrier strike groups through the Gulf regardless.

The prospect of sanctions targeting the oil sector in a serious way for the first time has hit Iran's rial currency, which reached a record low on Tuesday and has fallen by 40 percent against the dollar in the past month.

Queues formed at Tehran banks and some currency exchange offices shut their doors as Iranians scrambled to buy dollars to protect their savings. World oil prices jumped more than 4 percent.

Army chief Ataollah Salehi said the United States had moved an aircraft carrier out of the Gulf because of Iran's naval exercises, and Iran would take action if the ship returned.

"Iran will not repeat its warning ... the enemy's carrier has been moved to the Sea of Oman because of our drill. I recommend and emphasize to the American carrier not to return to the Persian Gulf....we are not in the habit of warning more than once," he said.

The Pentagon appeared to walk a delicate line, assuring more "regularly scheduled movements" of aircraft carrier strike groups into the Gulf, but stopping short of announcing any special activity in response to the Iranian threat.

"The deployment of U.S. military assets in the Persian Gulf region will continue as it has for decades," the Pentagon said.

The aircraft carrier USS John C. Stennis leads a U.S. Navy task force in the region. It is now outside the Gulf in the Arabian Sea, providing air support for the war in Afghanistan, said Lieutenant Rebecca Rebarich, spokeswoman for the 5th Fleet.

The carrier left the Gulf on December 27 on a planned routine transit through the Strait of Hormuz, she said.

Forty percent of the world's traded oil flows through that narrow straight - which Iran threatened last month to shut if sanctions halted its oil exports.

Brent crude futures were up more than $4 in late Tuesday afternoon trade in London, pushing above $111 a barrel.

Asked at the Pentagon whether there was any U.S. military plan to bolster its presence in the Gulf or test the Iranian threat, spokesman George Little said: "No one in this government seeks confrontation over the Strait of Hormuz."

"It is important to lower the temperature," he said.

Tehran's latest threat comes at a time when sanctions are having an impact on its economy, and the country faces political uncertainty with an election in March, its first since a 2009 vote that triggered countrywide demonstrations.

The West has imposed the increasingly tight sanctions over Iran's nuclear program, which Tehran says is strictly peaceful but Western countries believe aims to build an atomic bomb.

After years of measures that had little impact, the new sanctions are the first that could have a serious effect on Iran's oil trade, which is 60 percent of its economy.

Sanctions signed into law by U.S. President Barack Obama on New Year's Eve would cut financial institutions that work with Iran's central bank off from the U.S. financial system, blocking the main path for Iran to receive payments for its crude.

The EU is expected to impose new sanctions by the end of this month, possibly including a ban on oil imports and a freeze of central bank assets.

Even Iran's top trading partner China - which has refused to back new global sanctions against Iran - is demanding discounts to buy Iranian oil as Tehran's options narrow. Beijing has cut its imports of Iranian crude by more than half for January.

Turkish Foreign Minister Ahmet Davutoglu will visit his counterpart in Tehran on Wednesday to discuss Iran's nuclear program and developments in Iraq and Syria.

Iran has responded to the tighter measures with belligerent rhetoric, spooking oil markets briefly when it announced last month it could prevent shipping through the Strait of Hormuz.

It then held 10 days of naval exercises in the Gulf, test firing missiles that could hit U.S. bases in the Middle East. Tuesday's apparent threat to take action against the U.S. Navy in international waters takes the rhetoric to a new level.

Experts still say they do not expect Tehran to charge headlong into an act of war - the U.S. Navy is overwhelmingly more powerful than Iran's sea forces - but Iran is running out of diplomatic room to avert a confrontation.

"I think we should be very worried because the diplomacy that should accompany this rise in tension seems to be lacking on both sides," said Richard Dalton, former British ambassador to Iran and now an associate fellow at Chatham House think tank.

"I don't believe either side wants a war to start. I think the Iranians will be aware that if they block the Strait or attack a U.S. ship, they will be the losers. Nor do I think that the U.S. wants to use its military might other than as a means of pressure. However, in a state of heightened emotion on both sides, we are in a dangerous situation."

Henry Wilkinson at Janusian Risk Advisory consultants said the threats might be a bid by Iran to remind countries contemplating sanctions of the cost of havoc on oil markets.

"Such threats can cause market confidence in the global oil supply to wobble and can push up oil prices and shipping insurance prices. For the EU powers debating new sanctions, this could be quite a pinch in the current economic climate."

The new U.S. sanctions law, if implemented fully, would make it impossible for many refineries to pay Iran for crude. It takes effect gradually and lets Obama grant waivers to prevent an oil price shock, so its precise impact is hard to gauge.

The European Union is expected to consider new measures by the end of this month. The sanctions would halt purchase of Iranian oil by EU members such as crisis-hit Greece, which has relied on easy financing terms offered by Tehran to buy crude.

Greek government sources said that Athens, thought of as a possible veto-wielding holdout, was ready to support sanctions. One official told Reuters: "If the European Union decides to impose the sanctions, Greece will join them."

Michael Mann, spokesman for EU foreign policy chief Catherine Ashton, said member states would discuss the issue this week in the hope of agreeing on new steps before the January 30 meeting. "The ball is still in the Iranians' court," he said.

Iran has written to Ashton asking to restart talks over its nuclear program that collapsed a year ago. The EU says it does not want talks unless Iran is prepared to discuss serious steps, such as halting its enrichment of uranium.

Although China, India and other countries are unlikely to sign up to any oil embargo, tighter Western sanctions mean such customers will be able to insist on deeper discounts for Iranian oil, reducing Tehran's income.

Beijing has already been driving a hard bargain. China, which bought 11 percent of its oil from Iran during the first 11 months of last year, has cut its January purchase by about 285,000 barrels per day, more than half of the close to 550,000 bpd that it bought through a 2011 contract.

The impact of falling government income from oil sales can be felt on the streets in Iran in soaring prices for state subsidized goods and a collapse of the rial currency.

"The rate is changing every second ... We are not taking in any rials to change to dollars or any other foreign currency," said Hamid Bakshi at an exchange office in central Tehran.

The economic impact is being felt ahead of a nationwide parliamentary election on March 2, the first vote since a disputed 2009 presidential election that brought tens of thousands of Iranian demonstrators into the streets.

In a sign of political tension among Iran's elite, a court jailed the daughter of powerful former President Akbar Hashemi Rafsanjani on Tuesday for "anti-state propaganda."

Rafsanjani sided with reformists during the 2009 protests. Daughter Faezeh Hashemi Rafsanjani went on trial last month on charges of "campaigning against the Islamic establishment."