Erdoğan and Biden speak over the phone 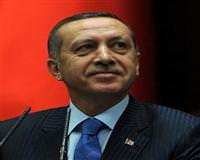 A written announcement released by the White House regarding the Biden-Erdoğan discussion, states: "U.S. Vice President Biden and Prime Minister Erdoğan spoke on the telephone today to discuss regional issues including the political developments in Iraq in an effort to closely consult on issues of mutual interests."
Following up on their conversation during the Vice President's trip to Turkey in December, Biden and Erdoğan agreed on the need to advance security support the rule of law and encourage democracy in the region. They agreed that our two governments would remain in regular contact on these issues."