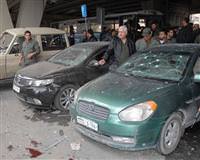 A suicide bomber killed 26 people and wounded 63 in Damascus, Syria's interior minister said, vowing an "iron fist" response to Friday's carnage in the heart of the capital after similar attacks two weeks ago.

Qatar's prime minister, Sheikh Hamad bin Jassim al-Thani, said Syria was not implementing a deal with the Arab League aimed at halting violence in the country and that League monitors could not stay there to "waste time."

An Arab League committee is due to meet on Sunday to discuss an initial report by Arab observers who are checking Syria's compliance with the plan to end President Bashar al-Assad's crackdown on nearly 10 months of unrest.

Sheikh Hamad said the Syrian army, required to pull out of Syrian cities according to the deal, had not withdrawn and that there had been no end to killing during the 10 days spent in Syria by the Arab monitors.

The Arab League meeting may decide whether to continue the mission or to refer Syria to the United Nations Security Council, perhaps paving the way for some form of international action, a scenario that many Arab countries are keen to avoid.

Arab League chief Nabil Elaraby said he was sending a message with Khaled Meshaal, the Damascus-based leader of the Palestinian Islamist group Hamas, asking the Syrian government to work "with integrity" to halt the violence.

Interior Minister Ibrahim al-Shaar, quoted by state television, said 26 people had been killed in the blast in the Maidan district of Damascus, including 15 who could not be identified because their bodies had been shredded in the blast.

"We will strike back with an iron fist at anyone tempted to tamper with the security of the country or its citizens," said Shaar. He said 63 people had been wounded.

Some in the opposition said the government itself had staged the attack to try to show that it was fighting blind violence rather than a pro-democracy movement.

State television showed body parts, bloodstains and broken glass from the explosion. Several riot police shields were shown near a wrecked bus that was among several damaged vehicles.

On December 23 at least 44 people were killed by what Syrian authorities said were two suicide bombings that targeted security buildings in the Syrian capital, one day before the head of the Arab League observer mission arrived.

The TV showed crowds of angry locals gathered at the scene, chanting "God, Syria and Bashar only" and "God protect the army" and "With blood and soul we sacrifice for you Bashar."

The monitors confirmed they had visited the scene. "We are only here to observe and document," one of them told Reuters by telephone.

However, a BBC Arabic service reporter was able to accompany three Arab monitors on a five-hour visit to the town of Irbine, on the outskirts of Damascus, the BBC reported.

It was the first time foreign media were known to have been able to cover the activities of the monitors directly, although media access was a condition stipulated by the Arab League.

The BBC said it had been able to film, unhindered by the security forces, an anti-Assad protest in Irbine.

Protesters and residents told the observers, all Algerian diplomats, of harsh treatment at the hands of the security forces. The observers then witnessed a demonstration in which the crowd demanded Assad's execution, the BBC said.

The Arab League's special committee on Syria is due to meet in Cairo on Sunday to debate the initial findings of the observer mission, which has been criticized by Syrian activists who question its ability to assess violence on the ground.

Arab states are wary of instability in Syria, which the Arab League has suspended for failing to honor its first peace plan. Syria has been a major regional player, allied with Iran and the Lebanese Shi'ite Hezbollah group.

Hezbollah, a political and militant group that fought a war with Israel in 2006, blamed the United States for the blast.

"This is a second step in the plan by evil American forces and those under its control in our region to punish Syria for its firm support of resistance forces against the Zionist enemy (Israel) and the West," it said on its website.

U.S. State Department spokeswoman Victoria Nuland said that, as with previous attacks, Syria had blamed "just about everybody" - the opposition, al Qaeda and the United States - while the opposition, including the Free Syrian Army (FSA), had denied being behind the attacks and accused the authorities.

"At the present time we can't say one way or the other how this happened but what we can say is that, obviously, we condemn the attack," she said.

The United Nations says more than 5,000 people have been killed in the popular uprising against Assad. The government says "terrorists" have killed 2,000 members of the security forces during the revolt.

The monitors began work on the streets on December 26 to try to verify whether the government was keeping its promise to pull troops and tanks out of cities and free thousands of detainees.

The FSA, an armed opposition force composed mainly of army deserters, condemned the attack and blamed the authorities.

An opposition activist, who asked not to be named, said Islamist militants were taking hold in Syria and may have been behind the blast. "I think we will be seeing more of these attacks in the coming days, I am sorry to say," he said.

One Damascus resident, who gave her name only as Dima, said the city had been tense even before the blast. "Some friends who work in the security forces were warning my family since yesterday to stay at home," she said. "The streets were empty."

The violence in Syria has raged unabated since the Arab monitors arrived, with scores of people reported killed.

Pro-Assad forces also wounded at least three protesters when they fired at a crowd at a Damascus mosque in a district where a security headquarters was located, a witness said.

The witness said pro-Assad militiamen and secret police agents fired water cannon and then assault rifles after the protesters in the Kfar Souseh district refused to disperse.

"I saw three people on the ground and I do not know if they are dead or alive," said the witness, who lives nearby.

Arab government sources said on Thursday the League monitors would pursue their mission in Syria, despite criticism from Qatar's prime minister that they had made mistakes.

Syrian activists say the Arab monitors have had inadequate access to trouble spots, a charge denied by Damascus.