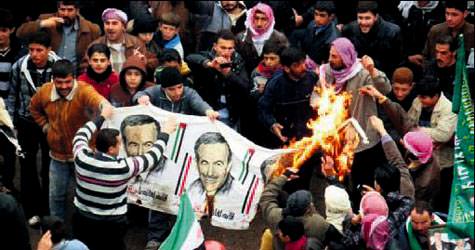 The Arab League has urged the Syrian government to end its violence against protesters and allow League monitors in the country to work more freely, but stopped short of asking the U.N. to help.

The arrival last month of the monitors in Syria to judge whether the government was honouring a pledge to end a crackdown on a popular revolt has not ended the violence, in which the United Nations says more than 5,000 people have been killed.

After a progress meeting in Cairo Sunday, the Arab League group on Syria said the government had only partly implemented a promise to stop the crackdown, free those jailed during the crisis and withdraw its troops from cities.

In its closing communique, the League said it would increase the number of monitors from the present 165 and give them more resources, ignoring calls to end what pro-democracy campaigners say is a toothless mission that buys more time for Syrian President Bashar al-Assad to suppress opponents.

Arab League officials said the continuation of the mission, due to make a full report on January 19, depended on the Syrian government's commitment to ending violence and honouring its promises. League foreign ministers will discuss the findings on January 19-20.

"If the ... report comes out saying the violence has not stopped, the Arab League will have a responsibility to act on that ... We have to be clear and honest with the Syrian people," Qatari Prime Minister Sheikh Hamad bin Jassim al-Thani told a news conference after the meeting.

He did not say what the Arab League might do, but Assad's failure to abide by the peace plan resulted in Syria's suspension from the 22-member regional body in November.

Qatar, which chairs the group and has been critical of the mission's performance, had proposed inviting U.N. technicians and human rights experts to help Arab monitors assess whether Syria was honouring its pledges.

"We have not yet agreed to send individuals," Sheikh Hamad said. Asked if this could happen in the future, he said: "it depends on how events develop."

About 50 protesters gathered outside the Cairo hotel where the meeting was held, singing: "The people want the president dead" and "Down, down with Bashar." Some waved posters showing Assad as a vampire sucking the Syrian people's blood.

Some Syrian opposition groups hope a failure of the mission might open the way to foreign military intervention like that which helped topple Libya's Muammar Gaddafi last year.

But Arab League Secretary General Nabil Elaraby said that while the Syrian opposition had asked for the case to be referred to the U.N. Security Council, there was no international appetite for military intervention in Syria.

In Syria, security forces and pro-Assad militiamen killed seven people Sunday in and around the central city of Homs, the Syrian Observatory for Human Rights said.

Another opposition organization, the Local Coordination Committees, put Sunday's death toll at 14, including 10 in Homs.

The Free Syrian Army, an armed opposition force composed mainly of army deserters, has joined the 10-month revolt, which has turned increasingly violent. The government says "terrorists" have killed 2,000 members of the security forces during the uprising.