Tariq al-Hashimi: "Iraq’s security is a concern for Turkey” 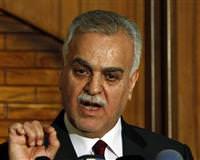 Iraq’s Vice President Tariq al-Hashimi: “We know that the instability situation in Iraq also poses a threat to Turkey’s security.”

Expressing that he knows the Turkish publish hopes that the Iraqi public will have a more prosperous life, Hashimi goes on to state that Prime Minister Recep Tayyip Erdoğan's statements on the instability in Iraq are being closely followed.
Hashimi expressed that he knows Turkey is closely affected by the situation in Iraq, and that being in contact with Iraqi officials in order to reach a solution is due to the importance Turkey places on the region.

"I feel indebted to the Prime Minister for the comments he has made regarding my case," explains Hashimi. "Two months ago, I said to the Prime Minister, 'Maliki has cornered me into the green zone. He had encircled my office and even my home with armored tanks.' The Prime Minister attended to my situation personally."
Explaining with gratitude that Prime Minister Recep Tayyip Erdoğan took an interest in his problems, Vice President Hashimi states, "I hope that by the Prime Minister's hands, Iraq will find peace, welfare and stability.' In response to a question, Hashimi said, "All Iraqi politicians are face to face with the same danger of going through what I have."
In response to the question, 'Have you made a request to be tried in Kirkuk?', Hashimi stated, "I made such a request a few days ago. To request to be tried in Kirkuk is natural. I issued the request with the high court; however I have not yet received a response."
Underlining that the reason he does not want to be tried in Baghdad is due to the reality that the laws there are in the control of certain individuals, Hashimi states, "In Baghdad the laws are in the hands of certain individuals. This concerns everyone and we do not know therefore how correct the rulings there would be."
Emphasizing that his security detail has also been subjected to slander and pressure, Hashimi states, "As long as the judicial system in Baghdad is not independent it would not be right to be judged here, right now I do not expect a correct ruling will come out from there."