Turkey offers up a harsh response to Rick Perry 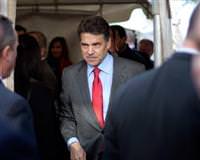 Turkey has condemned the words uttered by U.S. Republican Presidential hopeful and Texas Governor Rick Perry at a debate in South Carolina.

The Foreign Ministry has condemned statements made by Texas Governor and Republican presidential hopeful Rick Perry in regards to Turkey. "It is expected that individuals who are potential candidates for positions of responsibility such as the U.S. Presidency would be more knowledgable on the world and would be more careful in the statements they make."

Foreign Affairs Ministry Spokesmen Selçuk Ünal was responding to a question regarding Rick Perry's statements which he called, "unfounded and inappropriate claims which they strongly condemn."
Ünal went on to state the following: "It is expected that individuals who are potential candidates for positions of responsibility such as the U.S. Presidency would be more knowledgeable on the world and would be more careful in the statements they make. Turkey became a member of NATO when Mr. Governor was just two years old. Turkey is one of the members to have contributed significantly to the Transatlantic Alliance's history of struggle and will remain so.

Turkey is one of the forefront nations when it comes to the fight against terrorism. Turkey co-chairs the Global Counter Terrorism Forum with the United States. Our leaders are political figures who are respected not only in our region but all over the world and whose views are considered with great esteem."
Spokesman Ünal also noted that at any rate, Perry's unfortunate views are not embraced by the Republican Party base and that the aforementioned individual has also been shown to have weak support in public opinion surveys and preliminary elections. This situation portrays the good sense of United States voters. That is, they don't have time to waste on someone who doesn't even know who the United States' allies are."