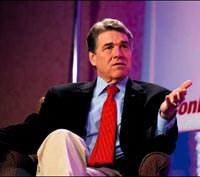 Perry had recently remarked that Turkey was run by Islamist terrorists and should be removed from NATO and that all aid from the United States must be halted.
Meanwhile, official results from the Republican's first stop, showed former Pennsylvania Senator Rick Senatorum coming in 34 votes over former Massachusetts Governor Mitt Romney at the Iowa caucuses.