Tunisian Minister of Foreign Affairs Abdüsselam: Prime Minister Erdoğan has become the voice of the oppressed 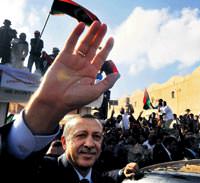 Asked whether he believed the United States was responsible for the series of uprisings, Refik Abdüsselam stated, "American's cannot do everything they want. Don't forget, Americans also suffered a thrashing in both Iraq and Afghanistan. They do not have a magical key that provokes societies." Abdüsselam went on to state, "It was the public's voice and social demands that were behind the Tunisian uprising."

Abdüsselam also inferred that Americans and Europeans were not necessarily pleased by the Arab Spring due to the fact that their strategy for the Arab world is based on political stability. "However," states Abdüsselam, "later, Americans understood that democracy in the Arab world is to their benefit. Their previous strategy was to protect political stability in despot regimes run by the likes of Mubarak and Bin Ali. They have now been successfully convinced that the only way to achieve political stability is through establishing democracy by respecting the public's demands. A strong democracy is to the benefit of both the public as well as international powers", states Abdüsselam.

Abdüsselam went on to state, that it was an isolated Israel that felt the most discomfort by the rising voices from the Arab public. "Israel has lost their treasures such as Bin Ali and Mubarak."

While speaking with Nur Batur, Abdüsselam was extremely careful regarding his wording when referencing Israel. He never mentioned the dissipation of Israel, nor mentioned conflict. He simply sufficed to refer to UN rulings and international agreements when inferring that he wanted the Palestinian state to be founded. Abdüsselam's approach to both the United States and Israel, displayed a strong sign of compromise between Ennahda and the USA following the revolution. In actuality, the fact the leader of the Ennahda Movement made his first trip to Washington following the elections is representative of Tunisian's Islamic party's pursuit of moderate policy and seeking of a compromise with the United States.

'Erdoğan is strong, honest and charismatic…'

Ennahda's young leader Abdüsselam states: "The Arab public was seeking out a powerful and honest leader. Erdoğan became the voice of the oppressed. Turkey is a leading nation in the region." Abdüsselam went on to explain, "Erdoğan has become a new leader in the region and Turkey a new model. For Cairo, for Tunisia, for Rabat, Turkey has become an extremely desirable model and Erdoğan is an extremely charismatic politician. The potential of Erdoğan to be an even more influential leader in the Arab and Islamic world is dependent on Turkey's strength and weight."