Turkey to build a hospital in Somali 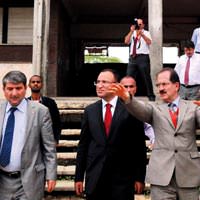 Turkey’s Housing and Development Administration has held a tender for the building of a 200-bed capacity Turkish general hospital in Somalia.

After Prime Minister Recep Tayyip Erdoğan and his accompanying committee paid a visit to the nation, which is currently suffering the worst draught in 60 years, Turkey made it a priority to send humanitarian aid and to come up with solutions to solve the starvation and draught crisis in Somalia.

In addition to delivering aid, Turkey is seeking permanent solutions for Somalia by way of implementing a number of short and long-term projects, the most recent of which is to build a 200-bed capacity general hospital.

Upon Erdoğan's directive, Turkey's Housing and Development Administration (TOKİ) has already begun working on building infrastructure needs such as creating residences, roads, a mosque, a market area, 40-class nursing schools and now a 200-capacity hospital, which will be built as a donation. TOKİ held a tender for the hospital's construction at their Bilkent center, in which nine firms participated.