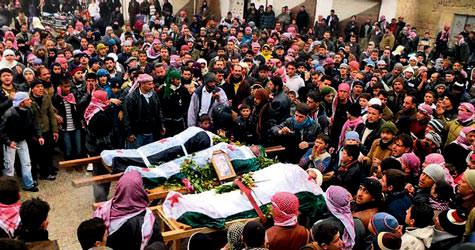 A series of well-known scholars and intellectuals from the Islamic world have signed a declaration against Syria’s regime under Assad, which they delivered for release to the AA news agency.

The fetwa, which was signed by 107 well-known Islamic scholars, including the head of the International Union of Muslim Scholars Dr. Yusuf al-Qaradawi, Saudi intellectual Salman al-Ouda and Egyptian mufti Dr. Ali Juma, and released Tuesday night states that being subjected to the Assad regime was no longer acceptable and emphasized the necessity of breaking loyalty to the regime.

"The Free Syrian Army and the revolutionaries should be supported both materially and spiritually and in all areas, including withdrawing embassies from Syria and delivering messages of protest to Russia and China for their support to the Syrian administration."

"Massacring the public is unacceptable"
The declaration goes on to refer to the Syrian regime's "abuse, oppression and bloodshed" and states that this situation is unforgettable and that it is a shame for both those who remain indifferent and those who have contributed."

The fetwa states that the public massacre staged by the army and security forces was unacceptable and that those who are told to kill others should object and openly disobey such orders. It also states that those who have not gone against such directives thus far will eventually have to face "repentance".

"Desert the army" fetwa
The declaration states, "We are issuing a fetwa for people to abandon the military and to join the Free Syrian Army." The fetwa also notes that the Free Syrian Army needs to fulfill their true obligation to protect the civilian public and must steer clear of revenge.

The declaration emphasizes that committees need to be set up in order to support the revolutionary movement and that these committees should also be established in Turkey, Jordan and Lebanon in order to provide food and other humanitarian aid to the Syrian public.