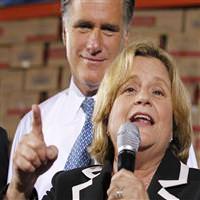 Republican House representative Lehtinen released a statement seemingly intended as a 2012 election investment as she touched upon issues that could could U.S.-Turkish relations despite the close collaboration developed between Turkey and President Obama.
Lehtinen chose to touch upon issues of contention for Turkey; a nation considered by the U.S. to be crucial in solving the Syrian issue and in doing so has imposed on the Obama administration.
The announcement released on the U.S. House Committee of Foreign Affairs website expresses that Turkey is a very important regional actor yet goes on to state, "but it must be a more responsible actor. Turkey's contributions to the NATO alliance have been vital in the war on terror, particularly in Afghanistan. I also applaud Turkey's recent efforts to pressure the Assad regime."
Lehtinen then goes on to purport that Turkey revises its policies towards Cyprus, Iran and Israel and criticized Turkey's support of the aid flotillas which deliver humanitarian aid to Gaza and goes on to state, "I urge Turkey to reconsider its policies and actions toward Israel, and to do everything it can to pressure Iran to abandon its nuclear ambitions."
The announcement was the expression of the personal views of a Republican Party member rather than those of the Obama administration. The suggestive mannerism of this announcement, intending to garner support from the Israeli lobby was not at all taken into consideration by Turkish Foreign Affairs officials.
This is a translation of an article by Nur Özkan Erbay.
Washington D.C./ USA SABAH