‘A military strike on Iran would be a disaster’ 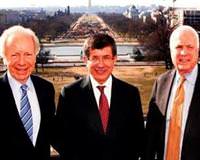 During his stay in the U.S. capital, Foreign Affairs Minister Davutoğlu addressed a Washington-based think tank, the Center for Strategic and International Studies during which he qualified a potential military strike against Iran as a ‘disaster’.

"This should not be an option; it is not advisable nor applicable. As Turkey, we will stand against this. We will never approve any new operations or military tension in our region."

ALL DAY AT THE CONGRESS

Yesterday, Foreign Affairs Minister Ahmet Davutoğlu spent a day of meetings at the U.S. Congress. There he met with Republican Party Arizona Senator John Mc Cain and the Democratic Party's Massachusetts Senator and Chairman of the Senate Foreign Relations Committee John Kerry as well as a number of others.