SETA asks, ‘What’s Next for Syria?’ 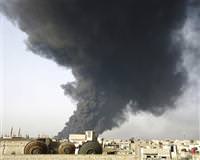 On Wednesday, February 15th, the Washington D.C. office of the Foundation for Political, Economic and Social Research (SETA) will be holding a panel from 12:00 to 2:00 PM entitled ‘Syria: What’s Next?’

The panel intends to question how the future looks for Syria… With Russia and China vetoes on the threshold of a United Nations Security Council draft resolution, the Assad regime's persistent slaughtering of citizens in critical areas of strife such as Homs continues to lead to civil war. The United States and Turkey have both taken clear steps towards expressing the need for humanitarian aid and support for the Syrian democratic opposition. The conference held today at the SETA Foundation in Washington aims to deal with these issues as well as to question "As so many outside powers have clashing geopolitical, security, and economic interests, what does the road ahead look like for Syria?"

Kadir Ustun the Research Director at The SETA Foundation at Washington D.C. will be serving an moderator.