Khojaly genocide protested all over the world 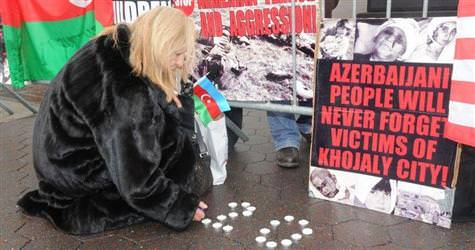 The anniversary of the Khojaly Genocide was commemorated by crowds who gathered in front of the UN headquarters in New York in protest of the atrocious event.

The protest, organized by the Azerbaijani community in New York drew out a number of Azeri and Turkish nationals who came out waving Azerbaijani and Turkish flags to condemn the tragic page in history on the day of its 20th anniversary. The demonstrators carried signs stating, "Armenians, You are Guilty of Genocide", "The Khojaly Tragedy Committed by the Armenians is One of the Worst Crimes of Humanity in the 20th Century", "Armenians are Child Murderers" and "The Victims from Khojaly Will Live on Forever". During the demonstrations, slogans such as, "We Want Justice for Khojaly" and "Long Live the Turkish World" were chanted by the protesters. The demonstrators also distributed brochures that explained the tragic incident to passers-by in the park across from the UN building.
During the demonstration, in which both the American and Azerbaijani national anthems were played, Ercan Yerdelenli, the head of the Azerbaijani Association of New York, addressed the crowd in English to and stated that this incident was a genocide staged by Armenians against Azeri Turks, in which civilians were brutally killed regardless of whether they were women, children or elderly.
Ali Çınar, the chairman of the Turkish-American Associations Federation (TADF) also addressed the crowd, stating that the TADF supports the demonstration. "Azerbaijan and Turkey is one, we have set out together on all national cases and therefore we also condemn the Khojaly genocide staged by Armenia."
What happened?
On February 26th, 1992 the Armenian army committed genocide by using the worst forms of torture to kill 613 civilians, including women, children and the elderly in Azerbaijan's Khojaly village, located in the higher Karabakh region.
Out of those killed in the massacre, 83 were children, 106 were women and 70 were elderly. A total of eight families were completely eradicated. There were 487 people who survived heavily wounded and 1,275 people were taken hostage, with 150 still missing. Inspection of the bodies showed evidence of burning, a number of people's skulls were skinned, eyes were carved out and body parts, such as noses, ears and heads dismembered. Women and children were also subjected to the same savagery.
This tragic incident which transpired in Khojaly completely fits the criteria for both genocide and human rights crimes, as dictated by international law. What the Armenians did to Azerbaijanis falls into the category of criminal acts, human rights infringements and even genocide on a number of counts according to the Geneva Convention, the Human Rights Declaration, the International Agreement on Citizenship and Political Rights, the Proclamation for the Protection of Women and Children in Times of Ceasefire and Military Conflict and completely applies to the definition of genocide as dictated by the second item in the United Nations Convention on the Prevention and Punishment of the Crime of Genocide, which defines genocide as being "acts committed with intent to destroy, in whole or in part, a national, ethnical, racial or religious group."According to the facts of history surrounding this tragic massacre it's evidence is undeniable that the incident qualifies as being genocide and completely complies with the definition put forth by the UN Genocide Convention.