ETA relinquishes their weapons and apologizes; will the PKK do the same? 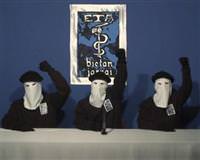 The political wing of the Basque separatist group ETA apologized publicly for the first time Sunday for the "pain" caused by the armed struggle that was abandoned by the terrorist group last year.

"Izquierda Abertzale recognizes that through its statements and acts it may have conveyed an image of insensitivity towards the pain caused by ETA's actions," said a manifesto titled "Let Us Build Peace in the Democratic Process". Responsible for the deaths of 829 people, the ETA announced they were giving up their armed struggle in October of 2011.

The recent announcement made by the ETA, has opened the door to speculation that the PKK terrorist organization, which has killed 30,000, may follow a similar route. It is yet unclear however, whether or not the PKK terrorist organization will ever relinquish their weapons and issue an apology for all of the hurt and civilian losses they have caused.