USA-Turkey relations are stronger than ever 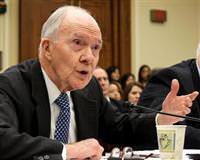 General Brent Scowcroft, former security advisor to former U.S. presidents George H. W. Bush and his son George W. Bush, states that Turkey’s foreign policy has advanced through diversification and that relations between the USA and Turkey have never been so bright.

Scowcroft, who also helped current U.S. President Barack Obama form his national security team, states that regardless of who wins the upcoming November U.S. presidential elections, due to the two nations' profound mutual interests, Turkey-U.S. relations will continue to improve over the next four years.

Scowcroft expressed that Turkey displayed an excellent stance throughout the Arab Spring uprisings and emphasized that Turkey's approach is not intended to intervene in other nations, it is to help.

Former National Security Advisor Snowcroft went on to state that it would be difficult for a military intervention in Syria to be successful. Scowcroft also emphasized that the channels of dialogue must remain open with Iran, which has being subjected to United States sanctions.

Scowcroft says that a potential operation on Iran by Israel, without consulting with the U.S., would be a significant strike on peace in the region. "If Israel attempts to embark on this alone, they will not become the nation that solves the problem, they will become the nation to instigate it."