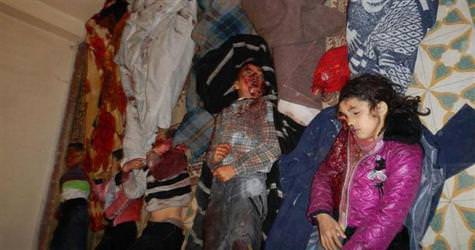 The bodies of 57 people were found in a number of homes in the Karm el-Zaytoun and al-Adawiyeh neighborhoods of the besieged city of Homs, where Assad regime security forces have been fighting raging battles against armed rebels, the opposition and activists said.

Out of the 57 bodies found in a number of homes in Homs' Karm el-Zaytoun and Adawiyeh neighborhoods, 28 were women, 23 were children and six were adult men. According to information from the opposition, the majority of those killed following the Syrian army's entrance into Homs, were relatives. The photographs of the deceased were made available to the international press by an opposition group.

Ömer Humsi, a member of the opposition in Homs announced over the telephone that a majority of the bodies showed traces of torture and some had even been burned alive. Humsi explained that out of the 28 women killed; at least 16 had been raped prior to their murder. Humsi also stated that they are recording their findings, through either capturing footage or photographs, which they will then bring to the United Nations agenda. The opposition also released the information that at least ten people were killed in conflict yesterday.

The Syrian government has acknowledged the deaths, emphasizing that it was the result of 'terrorist' activities. "The terrorist armed groups have kidnapped scores of civilians in Homs, killed and mutilated their corpses and filmed them to be shown by media outlets," state news agency SANA said.
During yesterday's UN Security Council meeting, BM Secretary General Ban Ki-moon stated, "The International Investigation Commission has ruled that the Syrian government has committed widespread and systematic violations of human rights spanning all the way to crimes against humanity."Meanwhile, UN Humanitarian Chief Valerie Amos thanked Turkey, Lebanon and Jordan for their help and for keeping their borders open.