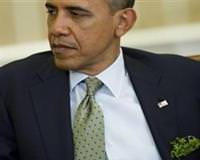 In a video message Obama addressed the Iranian public drawing on the friendship between Americans and Iranians and complained about what he called the Tehran regime's 'electronic curtain'.

Pointing out that they share the same human values, Barack Obama expressed that this is why there is no reason that America and Iran should be divided. Obama also brought up the great contributions of Iranians in America and to the American culture and reminded that this year's Oscar award for best foreign film went to an Iranian film. Obama also went on to mention that both countries' navies are fighting against piracy and pointed out that in the past Americans have even saved Iranian fishers from pirates.

Drawing attention to the fact that it is through the internet that both countries' people are able to communicate with one another, Obama stated, "Instead, the Iranian government jams satellite signals to shut down television and radio broadcasts. It censors the Internet to control what the Iranian people can see and say. The regime monitors computers and cell phones for the sole purpose of protecting its own power." Obama also expressed that technology should not be used to oppress people but instead to give them strength.

Emphasizing that America wants to engage in dialogue with the Iranian public, Obama called the Iran regime's attempt to block this as setting up an 'electronic curtain'. In his message, Obama went on to state that the Iranian public has "the universal right to think and speak for themselves" and said, "The Iranian government has a responsibility to respect these rights, just as it has a responsibility to meet its obligations with regard to its nuclear program. Let me say again that if the Iranian government pursues a responsible path, it will be welcomed once more among the community of nations, and the Iranian people will have greater opportunities to prosper."

Obama's announcement was broadcasted along with a translation in Persian. In addition to Iran, Nevruz is also celebrated in Central Asia, Anatolia and the Balkans.