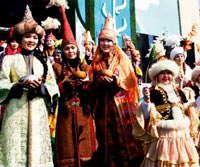 In Azerbaijan, an official ceremony held for Nevruz was attended by President Ilham Aliyev and his wife Mihriban Aliyev. In Turkmenistan, March 21st and 22nd were announced as official holidays. One of the most significant locations this year for Nevruz celebrations happened to be Ashgabat, the capital of Turkmenistan. Meanwhile in Kazakhstan celebrations were held in both the capital Astana as well as in the city of Almati and in Kyrgyzstan, Nevruz was celebrated in the capital Bishkek with President Almazbek Atambayev.

Nevruz is celebrated by more than 300 million people worldwide on March 21st, the day of the spring equinox, which marks the sun's crossing of the Equator and the start of spring in the Northern Hemisphere.