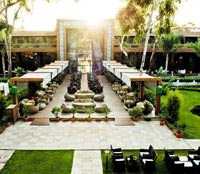 Armed militiamen stormed the Turkish-owned Rixos Al Nasr hotel in the Libyan capital Tripoli, firing shots and detaining its Turkish manager in a dispute over a six-month long unpaid bill. The Turkish embassy intervened to save the kidnapped Turkish manager.

The trouble started late on Saturday when militia leader Ali Daw Zintani lost his temper over being asked to pay an unpaid bill dating back to September.

Zindani stormed the hotel on Saturday accompanied by a brigade of his men and broke down the door, then shot twice into the air and broke vases in the lobby followed by kidnapping hotel manager Şükrü Koçak.

Militiamen then rushed off in their cars, taking the Turkish hotel manager with them. Koçak was taken to Zinatni's office in the Fallah district of the Libyan capital. He was released after a few hours as a result of intervention by the Turkish embassy.

Once they heard news of the incident, Tripoli Ambassador Ali Kemal Aydın, accompanied by embassy staff and fully armed special police forces arrived to the hotel. Members of the Turkish embassy immediately contacted Libya's National Transitional Council Chair Mustafa Abdul Jalil who aided in Koçak's release. Koçak, who was physically harmed during the kidnapping and attacked in Zintani's office, is now suffering from hearing loss and wounds on his knees.

"We do not hold all Libyans responsible for what happened. We know that this was done by a selective few. We were the first international firm to return to Libya. We love Libya. We have hosted a number of events in which high-level officials have attended and we will continue to do so," Koçak stated. Koçak also explained that two people have been arrested in connection to the incident; however the individual that led the raid was not amongst those apprehended.

Ambassador Aydın stated, "We are hopeful. And hopefully, our brother nation Libya will surpass these issues. Libyans harbor great affection and positive sentiments towards Turkey and Turks. We are not evaluating this incident as one conducted by Libyans against Turks. We perceive this to be one group's impulsive and individual act. Hopefully, we can leave this behind us." The Rixos Al-Nasr Hotel, which was forced to close down following the incident, will be re-opening today.