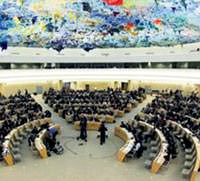 Israel said on Monday it has severed contacts with the U.N. Human Rights Council after its launch last week of an international investigation into Jewish settlements in the occupied West Bank.

The decision was announced by Israel's Foreign Ministry Spokesman Yigal Palmor, who explained that the fact-finding team the Human Rights Council planned to send to the West Bank will not be allowed to enter the territory, or Israel. Palmor also noted that they will not be recalling their U.N. ambassador in Geneva; however he expressed that within the framework of their decision they will be suspending all ties with the Council. Last week, the UN Human Rights Council reached a decision to send an investigative team to inspect the construction of Jewish settlements in the West Bank and east Jerusalem. Israel has accused the Council of acting biased against them.

Palestinian detainees being held in Israeli prisons have initiated a hunger strike in protest of being forced at gunpoint to provide DNA samples. Speaking on behalf of the detainees, Jamal Rajoup explained that his friends had been tied to chairs in single-person cells and were forced at gunpoint to provide DNA samples. Rajoup also explained that those who resisted were handcuffed and dragged or placed in solitary confinement. The detainees were also beaten by soldiers, says Rajoup, announcing that in protest as of Thursday the Palestinian prisoners have begun to refuse the food offered to them.