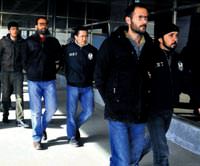 Italian police staged eight raids on homes in a number of cities throughout the city yesterday, arresting five PKK members who were extorting money from Kurdish immigrants.

Italian security forces recently staged an operation on the PKK terrorist organization for their attempts to extort what they call 'revolution taxes' from Kurdish immigrants. The investigation organized by the head of Italy's Anti-Terrorism Department (DIGOS) Stefano Berrettoni was initiated following the beating of a doner kebab store owner who was a Turkish citizen of Kurdish heritage.

The investigation conducted by DIGOS revealed that the incident was based on political motives and that a PKK cell situated in the Venice region was extorting money from Kurdish immigrants in Italy. It turns out the funds collected from Kurds residing in Northern Italy were being used to finance the terrorist organization.

The operation involved raids on eight homes in Rome, Modena, Padova, Udine and Pesaro. Five PKK members were arrested for extortion, battery, causing injury and terrorism. Eight people are still wanted by police. According to an announcement from Italy's Ankara Ambassador, in 2010 an operation was staged on the PKK which brought down their Italian wing however in this recent raid the mechanism for the organization's financial sources from Italy were hit hard.