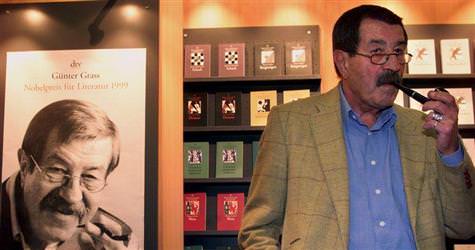 After making the weird statement, “there is no freedom of expression in Turkey, but there is in Israel,” American author Paul Auster has now received disappointing news from Israel’s ministry of internal affairs. Israel, which has already forbidden a number of intellectuals and members of the art world, has now banned Nobel award-winning German writer Günter Grass from entering the country.

Israeli Minister of Internal Affairs Eli Yishai has announced that the 84 year-old Nobel award-winning writer Günter Grass is no longer welcome in the country due to his recent poem which offers up criticism of Israel.

In an announcement released by the Interior Minister, Yishai states, "Günter 's lying and distorted poems are not welcome in Israel. I suggest he try them in Iran where he will find a sympathetic audience."

Günter Grass, had released the 69-line poem entitled What Must Be Said ('Was gesagt werden muss) in Germany's Süddeutsche Zeitung newspaper last week. The poem expresses that with its nuclear weapons; Israel poses a threat to world peace and calls for the supervision of both Israel and Iran's nuclear programs.

Volker Beck, Secretary General for the German Green Party Federal Assembly Group criticized the ban on Nobel award –winning German writer Günter Grass from entering Israel. On his website "Handelsblatt Online", Beck calls the decision made by Israel false and exaggerated and states, "This is not at all smart from a democratic standpoint. I hope that the travel ban issue will be reconsidered."

Grass points out to the possibility of Israel attacking Iran, which has not been proven to harbor even a single nuclear weapon; a situation that he says would endanger world peace. In his poem, Grass states, "with its stance, atomic power Israel is threatening the already fragile world peace."

"Why do I only say this now, aged and with my last ink: because tomorrow will be too late and this must be said now," reads the poem, which was published in the daily Süddeutsche Zeitung on Wednesday.