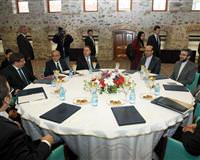 Today marks another day Istanbul plays host to nuclear negotiations with Iran. Davutoğlu is expected to deliver the message ‘do not commence with great expectations’.

Nuclear negotiations between Iran and the P5+1 nations (the five permanent member nations of the U.N. Security Council; the USA, England, France, Russia and China plus Germany) resume today, after breaking 15 months ago in Istanbul. Prior to the start of deliberations which will be held in the Lütfi Kırdar Congress Center, Ahmet Davutoğlu delivered a message to EU High Representative Catherin Ashton and Iran's National Security Council Secretary Saeed Jalili stating, "Do not begin negotiations with high expectations and preconditions. Negotiations are resuming now a year and a half later. Use this opportunity and do not keep your objectives too high."

THE WORLD IS WATCHING

Negotiations were to resume at ten this morning with the entire world's press tracking developments to see what sort of outcome surfaces. Turkey, which is solely hosting and not participating in negotiations, hopes that what comes out of today's meeting will be an announcement that deliberations are to continue. The last minute request made by Iran for negotiations to be held in Baghdad, Damascus or Beirut, instead of Istanbul resulted in escalating tension between Tehran and Ankara. With the clear rejection of any such request by the Western parties, last week the location for deliberations was announced as being Istanbul.