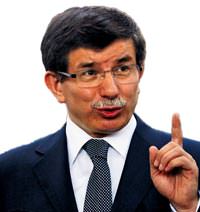 Delivering a briefing in Brussels to NATO nations’ foreign affairs and defense ministers, Davutoğlu stated that the Assad regime misused the chance offered by the Annan plan.

In Brussels to attend a meeting of NATO ministers, Minister of Foreign Affairs Ahmet Davutoğlu offered a detailed briefing on the situation in Syria. During the meeting, which was intended to handle the preparations for the upcoming May 20th-21st NATO Summit in Chicago, Davutoğlu relayed information on Syria, despite the issue not being part of the program's official agenda.

Bringing up the fact that Syria has violated Turkey's border with recent gunfire by the armed forces, Davutoğlu used a map to depict where Syrian refugees are staying in tent camps in Turkey and where attacks against civilians are still ongoing. During Davutoğlu's presentation, he also expressed that the Assad administration misused the opportunity granted to them through the Annan Plan.

At a press conference held yesterday at the NATO headquarters, U.S. Secretary of State Hillary Clinton stated, "Last week Syria opened cross-border fire into Turkey and Lebanon. "Our NATO ally, Turkey, has already suffered the effects of not only the influx of refugees that it is very generously housing, but also having two people killed on their side of the border because of Syrian artillery,"

During the NATO meeting, Davutoğlu also announced that they have begun an initiative with a group of nations in order to discuss Bosnia's NATO membership action plan.