Davutoğlu speaks with Annan on Syria 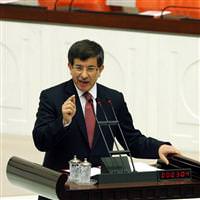 According to information received from diplomatic sources, Annan called Ahmet Davutoğlu to relay information on the activities of the U.N. mission in Syria. The conversation lasted for approximately 15 minutes and Davutoğlu shared with Annan how the situation appeared from Turkey's perspective.

Meanwhile, Minister of Foreign Affairs Davutoğlu also met with Speaker of the Iraqi Council of Representatives Usama al-Nujayfi. Also According to diplomatic sources, the meeting was held at the Foreign Affairs Ministry Residence and the two shared opinions on recent developments in Iraq.

The Foreign Affairs Ministry has released an announcement stating that Davutoğlu will be in Bosnia Herzegovina from May 3rd to 4th, where he will visit Bosnia as a guest of Foreign Affairs Minister Zlatko Lagumdzija. The announcement shared Davutoğlu's plans to also meet with Presidential Council Chairman Bakir Izetbegovichand Council members Nebojsa Radmanovic and Zelijko Komsi, Chairman of the Council of Minister Vjekoslav Bevanda, Minister of Defense Muhamed Ibrahimovic, members of the BosniaHerzegovina Parliamentary Executive Board as well with leaders from political parties.

Davutoğlu will also be attending a ceremony held by the International League of Humanists which is based in Sarajevo and consists of Serbian and Croatian intellectuals, as the recipient of 'The Golden Charter' award. The Foreign Affairs Minister will also meet with High Representative Valentin Inzko.

The Ministry announcement also stated that the fact that this trip is taking place prior to Davutoğlu's scheduled trip to Chicago for the NATO Summit holds significance. Turkey, which is also a NATO Contact Point Ambassador for Sarajevo, strongly supports NATO's 'open door' policy and is leading the efforts in an alliance to ensure Bosnia Herzegovina is officially signed on to the Membership Action Plan (MAP) during the Chicago Summit.