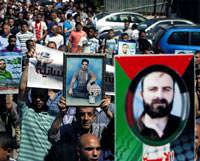 Palestinian prisoners, who are being held in Israeli prisons without any charges against them, have written a letter to Prime Minister Erdoğan requesting assistance.

Considered to be the largest hunger strike in history, a hunger strike staged by 1,600 of the total 4,600 Palestinian prisoners being held in Israeli penitentiaries has begun to evoke international response.


While the news of ten prisoners having to be admitted to the hospital due to the strike, one of Israel's leading newspapers Yedioth Ahronoth also wrote that a letter requesting aid written by a leader amongst Palestinian prisoners has been relayed to Prime Minister Recep Tayyip Erdoğan on behalf of Hamas leader Ismail Haniyeh.

In the letter, prisoners requested that they be allowed more contact with their families and less isolation. The letter also requests that prison conditions be improved.

At the start of the year, Kader Adnan and Hana Şalabi, who were held in an Israeli jail without any charges against them, began to stage a hunger strike which has since grown in waves. After a strike which lasted approximately 70 days, the two prisoners were released. Three weeks ago, 1,600 prisoners, detained under the same conditions, also began to stage a hunger strike. Last week, Bilal Diab, who had been on the strike for 68 days, was taken to the hospital and yesterday ten other prisoners were also admitted.