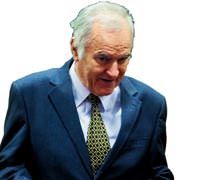 With full support for the Bosnians that suffered in the massacre of Bosnia, Turkey has been closely following the developments ever since the end of war in the Balkans and the process of trying those responsible for war crimes and violations of humanity.

Bosnian Serb general Ratko Mladic made a throat-slitting gesture to a woman who lost her son, husband and brothers in the Srebenica massacre at the start of his trial on Wednesday for some of the worst atrocities in Europe since World War Two.

Mladic, now 70, flashed a defiant thumbs-up as he entered the courtroom - the last of the main protagonists in the Balkan wars of the 1990s to go on trial at the International Criminal Tribunal for the former Yugoslavia in The Hague.

A hero to Serb nationalists, the "Butcher of Bosnia" to his Muslim and Croat victims, the pugnacious general eluded justice for 16 years until his capture in a cousin's farmhouse in Serbia last May.
The list of 11 charges stemming from his actions as the Serb military commander in the Bosnian war of 1992-95 ranges from genocide to murder, acts of terror and crimes against humanity.
He is accused of orchestrating not only the week-long massacre of 8,000 unarmed Muslim men and boys in Srebrenica but also the 43-month siege of the Bosnian capital Sarajevo, in which more than 10,000 people were killed by snipers, machine guns and heavy artillery.
In the public gallery, Munira Subasic, whose 18-year-old son, husband and brothers were killed in Srebrenica, stared at him from behind a glass barrier, crossing her wrists to imitate handcuffs.
Mladic stared back and drew a hand across his throat.