A war for energy in the Middle East! 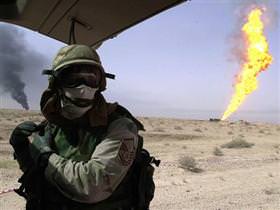 A report by one of the United States’ most reputed think tanks German Marshall Fund and the Transatlantic Academy, warns that a war may arise between Turkey, Cyprus, Israel and Lebanon due to the distribution of energy.

The section of the report that deals with Turkey, states that the division of the energy reserves in the Eastern Mediterranean between Turkey, Greek Cyprus, Israel and Lebanon may be an issue of such significance to even lead to conflict. The report also mentions how important the off-shore gas resources in Eastern Mediterranean is for the European Union and states that a 'sensible resolution would be a 'win-win' for all parties.

The report also draws on the political issues involving the four nations which claim stake to the resources discovered in the Eastern Mediterranean and underlines the difficulty of peacefully distributing said reserves. According to the report, Israel and Lebanon are legally in a state of war. With Israel's inclusion of new off-shore areas to their already highly disputed land distribution stemming to the founding of the State of Israel, the possibility of conflict with Lebanon appears to be increasing daily. The report mentions Israeli Infrastructure Minister Uzi Landau's response that "Israel would use force to protect its gas fields" as an indicator of the clear tension between Israel and Lebanon.

Lebanon, Israel, Turkey and Cyprus could go to war!

The report also noted that the exclusive economic zone designated by Greek Cyprus and Israel is another source of tension and states that this agreement only works towards aggravating already problematic relations between Turkey and Greek Cyprus as well as Turkey and Israel. The report draws upon the example of Turkish ships, which were deployed in the area for gas and oil exploration purposes being harassed by Israeli warships.

The final section of the report openly expresses that potential conflict will be unavoidable should Greek Cyprus attempt to take advantage of resources independent of North Cyprus while continuing to uphold an exclusive economic agreement to which Turkey will never agree.

The report prepared by the German Marshall Fund and the Transatlantic Academy concludes by warning that a crisis over off-shore resources involving NATO member Turkey, EU member Cyprus and Israel, the United States' closest ally, would have devastating consequences for the USA, the EU and the surrounding region and therefore invites the international community to comprehend the gravity of the situation and to take an initiative.