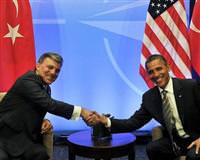 Gül and Obama met to discuss Turkish-American relations, which are at a historical peak, during the NATO summit in Chicago and ended up bringing a number of issues to the table.

President Abdullah Gül's foremost demand of his U.S. counterpart Barack Obama at the NATO summit was to request the USA fulfill their requests in regards to the fight against terrorism. Gül especially pointed out that they have not received clear results on the issue of the United States' sale of unmanned aerial vehicles.

According to diplomatic sources, Obama responded by stating, "We understand your needs. This is on our agenda; however it is not something I can deal with on my own. We have to convince the congress."


Discussing the situation in Syria with U.S. President Obama, Gül stated that the issue must be perceived as being one that involves the international community. Obama responded by stating, "You should have no concerns on the matter. We are on the same line as you and have no doubt that this is an international issue."

Gül went on to relay Turkey's stance and concern for the events still ongoing in Syria. Emphasizing that the Assad regime's actions towards its own nation are unacceptable, Gül expressed the need for the situation to come to a close and requested that the USA intensify efforts to that effect and play a more engaging and involved role.

U.S. President Obama noted that both nations' have been working closely together on the Syria situation and assured that the United States would continue their international efforts and will work with Turkey on the issue.

From Syria, the two Presidents' discussion veered towards the Arab Spring. At which point Obama expressed that the United States has two strong allies, referring to Turkey and Israel, and that he was of the opinion that if these two allies were on good terms and surpassed the issues between them, then the Arab Spring process, which is developing positively, would result in an even swifter establishment of stability in the region.
Gül responded by stating that Turkey's stance on the issue was clear. He expressed that Israel is well aware of the steps they have taken and need to take and that if they do come through, Turkey will act accordingly.