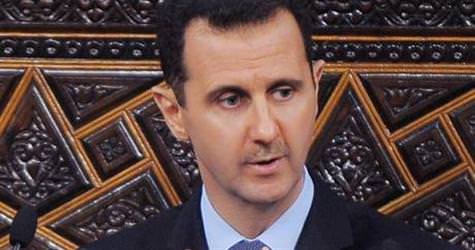 Speaking in a broadcast aired by a German television station, Syrian state leader Bashar al-Assad accused Turkey, Saudi Arabia and Qatar of supporting the opposition which he referred to as ‘armed terrorists’.

Blaming a number of countries, including Turkey, Saudi Arabia and Qatar, for obstructing the Annan plan, Assad stated, "These nations are assisting terrorists with funds and weapons."

'WE WOULD RESPOND TO MILITARY INTERVENTION'

During the interview, Assad was also asked what would happen in the case of military intervention, to which he stated they would respond.
"Our priority in the case of an attack would not be to retaliate; it would be to protect our country. This is our duty and our objective anyway."

'WE ARE DIFFERENT THAN EGYPT AND LIBYA'

Explaining that like Egypt and Libya, he will not be stepping down; Assad said that the situation in Syria is different. "Do we have a common point? What happened in Egypt and what is happening in Syria is entirely different. Our historical context and social structure are different from one another. There is nothing in common."

ANNAN IS IN SYRIA

Meanwhile, UN and Arab League Special Representative Kofi Annan has gone to Damascus in order to hold a series of meetings with Syrian officials to lay the Annan peace plan to the table.