Srebrenica a grave shame for Europe 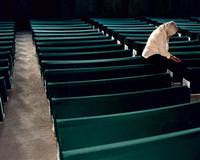 Nearly 520 identified victims of the Srebrenica massacre will be buried on July 11th, the 17th anniversary of the 1995 genocide in which Bosnian Serb forces killed up to 8,000 Muslim men of fighting age.

On Monday, thousands lined the streets of Sarajevo to pay tribute to the identified remains of 520 victims of the Srebrenica massacre who will be buried at a memorial cemetery during a ceremony held for the 17th anniversary of the massacre.

The Srebrenica massacre, considered to be the worst massacre in post World War II European history, transpired on July 11th, 1995 in Srebrenica a town in the east of Bosnia and Herzegovina.
Following the town's capture, all the men "of fighting age" that fell into Bosnian Serb hands were massacred in a systematically organized series of summary executions. The women of the town and men below 16 years of age and above 55 were transferred by bus to Tuzla, which was once a Turkish garrison town. Although most women were expelled to Bosnia-held territory, some of them were raped and killed.

The approximately 8,000 Muslim men and boys killed by Bosnian Serb forces commanded by Ratko Mladic were buried in mass graves throughout the town. This isn't the first time the victims' remains have been exhumed as over the years the perpetrators would secretly dig up the original mass graves with bulldozers only to transfer the decomposing remains to other locations.

The 520 sets of remains, found in 60 mass graves throughout the town and identified through DNA tests, will be buried at the Potocari` memorial center near Srebrenica tomorrow on the 17th anniversary of the massacre of 8,000 men and boys, which is defined by the International Court of Justice as genocide.

On Monday, three trucks delivering the 520 coffins passed through Sarajevo on their way to the Potocari cemetery near Srebrenica where they will be buried on Wednesday. Thousands came out to witness the convoy's passing and offer their condolences and blessings. Traffic was halted throughout the convoy's route in the Bosnian capital. The convoy made a stop at the Bosnian Presidency building where the weeping crowd placed flowers on the truck, while sprinkling ceremonial rose water along its path.

Tens of thousands of family members, foreign dignitaries and guests are expected to attend the ceremony in Srebrenica on July 11 marking the 17th anniversary of the massacre and the burial of 520 identified remains.