Srebrenica will never be forgotten 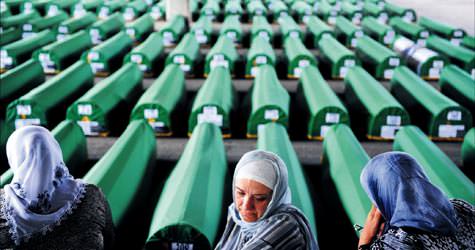 On the 17th anniversary of the Srebrenica massacre, 520 identified Muslim victims were buried yesterday. Fifty-thousand flocked to the Potocari Cemetery in Srebrenica, the ’City of white lilies’ as prayers were meddled with tears.

Once again, the 17th anniversary of the Srebrenica Massacre, the worst event to transpire throughout the Bosnian War and the most atrocious massacre suffered in Europe since World War II was commemorated with grave sadness and emotions.

DEATH WALK TO THE GRAVE

On July 11th, 1995 Serb troops led by General Ratko Mladic killed 8,500 Muslim men and boys over a period of five days. Since then, the remains of 5,137 victims have been found and identified and buried each year at Srebrenica's Potocari Memorial Cemetery. Yesterday, which was the 17th anniversary of the massacre, an additional 520 victims whose remains were identified through DNA testing were laid to rest.

A 'death walk', which began four days ago out of respect for the victims and their families, began in Bosnia-Herzegovina's Tuzla town and ended yesterday at the Potocari Memorial Cemetery, where tens of thousands gathered to commemorate the date.

For the families of the victims, yesterday was like a reburial for those lost, some leaving behind just a bone or a finger to be found in mass graves throughout the city. Speaking at the ceremony, Mayor of Srebrenica Durakoviç stated, "The entire world lies in these coffins today." Arthur Schneier, Founder and President of the Appeal of Conscience Foundation and Senior Rabbi, was also one of the speakers at the memorial event. Schneier a Nazi Holocaust survivor state that the silence of the international community only offers encouragement to perpetrators of new massacres.

U.S. President Barack Obama issued a statement from Washington honoring the lives lost in the massacre. "The name Srebrenica will forever be associated with some of the darkest acts of the 20th century. The U.S. administration strongly condemns the perpetrators of the massacre and rejects efforts to distort the scope of this atrocity," stated Obama.

The U.S. Los Angeles Times published a detailed article on the Srebrenica Massacre in which the writer recalled the words of the Ratko Mladic, also known as the 'Butcher of Bosnia' who exclaimed as he took over Srebrenica, "We give this town to the Serb nation. The time has come to take revenge on the Turks." The article goes on to read, "Seventeen years later, the words still hang in the air like poison gas over Srebrenica."

"Bosnia's pain is our pain"

Turkey's Deputy Prime Minister Bekir Bozdağ was also in attendance at the ceremony and laid a wreath at the Memorial Center while offering condolences to the victims' families. Mentioning that July was a month of sorrow for Bosnians, Bozdağ went on to state the following: "Even if there are borders between us, our hearts do not have borders. Bosnia's pain is our pain and its happiness is our happiness. We are here in Srebrenica in order to share the pain of our brothers. Srebrenica is a place where racism and remorselessness transform into a monster."

AN ANNOUNCEMENT FROM THE FOREIGN MINISTRY

Turkey's Ministry of Foreign Affairs released a written announcement condemning the Srebrenica Massacre and emphasizing that the International Court of Justice has ruled the atrocity to be genocide.
"We once again want to strongly condemn this vile crime of humanity and offer our grave condolences to the families whose pain we share for those killed. We also condemn any attempts to deny or underestimate the massacre which transpired in Srebrenica. We sincerely believe that the international community will make every effort possible to take the necessary precautions to ensure that similar events resulting from extreme nationalism or ethnic hatred never transpire and that a lesson is learned from what happened in Srebrenica," stated the foreign ministry.

Meanwhile, a group from the Young Bosnians Association also held a memorial ceremony in Istanbul's Taksim Square, filling cups with coffee to represent each of those killed in Srebrenica.

What is the Srebrenica Massacre?

In Srebrenica, a Muslim town that was under U.N. protection during the 1992-1995 Bosnian war, Serb troops, acting under orders of General Ratko Mladic staged a widespread massacre of almost 8,500 men and boys in just a few days. The massacre, which began when Dutch peace force troops handed over Bosnians to the Serbs, was staged by Serbian troops who filled buses and trucks with Bosnians they then ruthlessly murdered in forested areas, factories and warehouses. Every year on July 11th, the victims whose remains have been identified are buried.

After 16 years of living in hiding, war criminal Ratko Mladic was arrested last year in Serbia and is now facing trial for 11 separate charges at the U.N. war crimes court. Although Mladic denies the charges, human rights organizations believe he was the orchestrator of the Bosnian War which resulted in the deaths of at least 100,000 people.