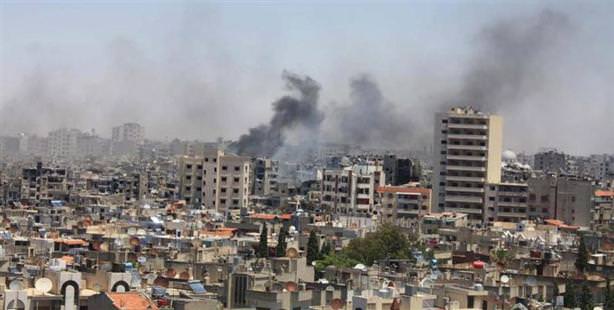 About 220 Syrians, mostly civilians, were killed in a village in the rebellious Hama region when it was bombarded by helicopter gunships and tanks then stormed by militiamen who slaughtered families as they tried to escape.

If confirmed, it would be the worst single incident of violence in 16 months of conflict in which rebels are fighting to topple President Bashar al-Assad. World powers are deadlocked over how to halt the bloodshed, with Russia and China opposed to calls from Turkey, the West and Arab nations for Assad to step down immediately.

UN special envoy Kofi Annan said he was "shocked and appalled" by news of "intense fighting, significant casualties, and the confirmed use of heavy weaponry such as artillery, tanks and helicopters" in the village of Tremseh. "I condemn these atrocities in the strongest possible terms," Annan said in a statement.

The Revolution Leadership Council of Hama told Reuters the Sunni Muslim village of Taramseh was subjected on Thursday to a barrage of heavy weapons fire before pro-government Alawite militiamen swept in and killed victims one by one. "More than 220 people fell today in Taramseh. They died from bombardment by tanks and helicopters, artillery shelling and summary executions," the regional opposition group said in a statement on Thursday evening. The Sunni Muslim village, surrounded by farmland near the Orontes River, was first shelled then invaded by pro-government Alawite militiamen who swept in and killed victims one by one. Some civilians were killed while trying to flee, it said.

Syrian state television said three security personnel had been killed in fighting in Taramseh and it accused "armed terrorist groups" of committing a massacre there.

Opposition reports also said rebels of the Free Syrian Army had been killed in a battle. Lieutenant Ibrahim Zuait al-Tarkawai was among rebels who died "defending the people of Tremseh", the Hama Revolution Leadership Council said.

"We can verify continuous fighting yesterday in the area of Tremseh," said United Nations monitoring mission chief General Robert Mood. "This involved mechanized units, indirect fire, as well as helicopters," he said. UN monitors were ready to "go in and seek verification of facts if and when there is a credible ceasefire", he said. Activists said the killing took place on Thursday, as the U.N. Security Council began negotiating a potentially crucial new resolution on Syria. Washington said it showed the need to move to tougher action, but Russia again ruled out such a step.

Armed Assad loyalists known as Shabbiha have been accused repeatedly of cold-blooded indiscriminate killings carried out on the coattails of army offensives into rebel-held districts.
Another activist organization, the Syrian Observatory for Human Rights, said over 160 people were killed on Thursday in Hama province, most of them in a massacre in Tremseh.

The Observatory said it had listed 40 victims by name so far, among them dozens of rebel fighters. More than 30 of the dead were completely burned. Some were killed with clubs and knives.

Fadi Sameh, an opposition activist from Tremseh, said he left the town before the reported killing spree but was in touch with residents. "It appears that Alawite militiamen from surrounding villages descended on Tremseh after its rebel defenders pulled out, and started killing the people. Whole houses have been destroyed and burned from the shelling.

"Every family in the town seems to have members killed. We have names of men, women and children from countless families," he said. Many bodies were taken to a local mosque, he added.
A local activist named Ahmed told Reuters there were 60 bodies at the mosque of whom 20 were identified by name.

"There are more bodies in the fields, bodies in the rivers and in houses ... People were trying to flee from the time the shelling started and whole families were killed trying to escape," he said.

According to a detailed account by activists before news of the massacre, a convoy of 25 vehicles with army and security forces headed west after dawn on Thursday, with three armored vehicles and five trucks towing artillery, passing through the town of Muharda in the direction of the village of Tremseh.
"They blockaded the village from all four sides and began violently and randomly firing on houses as a helicopter flew overhead. As the attack happened the electricity and telephone lines were cut. Residents gathered in the streets in a state of fear and panic. They were unable to flee because of the blockade from every side," the report posted on activist Web sites said.

In June, it took United Nations monitors two days to reach the site of an alleged massacre of 78 people shot or stabbed or burned alive in the village of Mazraat al-Qubeir, a Sunni hamlet, by fighters of Assad's Alawite sect.

Two weeks earlier the Syrian government denied responsibility for the massacre of 108 men, women and children in the town of Houla on May 25, the vast majority of them executed according to a U.N. report. Damascus was widely condemned for the atrocity.

Most of Assad's political and military establishment are minority Alawites, who form a branch of Shi'ite Islam. The revolt and the fighters behind it, and the street protesters who launched the revolt in March 2011, are mostly Sunni Muslims. The insurgents cannot match the Syrian army's firepower but they have established footholds in villages, towns and even cities across Syria, coming under attack from Assad's forces to respond fiercely with helicopter gunships and artillery. Following high-profile defections of a family friend and a top diplomat, both Sunnis, analysts said cracks were appearing in Assad's Alawite-dominated rule.

But Assad's strongest strategic ally, Russia, stuck by him on Thursday with a clear warning to his Western and Arab enemies that it would not even consider a tough new UN resolution.
Turkey, Britain, the United States, France and Germany want to make compliance with a transition plan drafted by international envoy Kofi Annan enforceable under Chapter 7 of the U.N. Charter.
This would allow the council to authorize actions ranging from diplomatic and economic sanctions to military intervention.

Russia's Deputy U.N. Ambassador Alexander Pankin warned Moscow would use its veto if it had to. "We are definitely against Chapter 7," he said. "Anything can be negotiated, but we do not negotiate this, this is a red line."

The Turkish Prime Ministry's Disaster and Emergency Management Directorate (AFAD) has announced that Turkey is currently hosting 38,914 Syrian refugees, who have fled violent clashes in their country.

AFAD's written statement said the refugees have been settled in the towns of Altınözü, Yayladağı, Reyhanlı, Apaydın and Karbeyaz in the southern provinces of Hatay, Şanlıurfa, Gaziantep and Kilis.
AFAD added that as of July 13, in total, 63,655 Syrian refugees have entered Turkey, with 24,751, in total, returning to Syria of their own will.