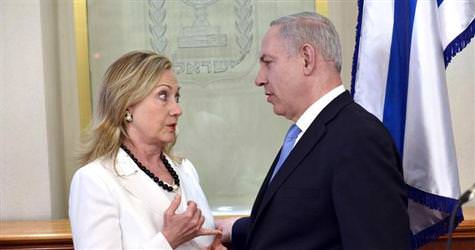 Moving on to Israel from Egypt, United States Secretary of State Hillary Clinton suggested to Netanyahu and other Israeli officials that they develop relations with Turkey.

After spending two days visiting the newly elected Egyptian President Mursi, Hillary Clinton arrived to Israel on Sunday. Meeting with Israeli President Benjamin Netanyahu on Monday, Hillary Clinton brought up the issue of deteriorated Turkey-Israel relations. According to Haaretz newspaper, Clinton highly suggested to Netanyahu as well as a number of other government officials that Israel attempt to repair ties with Turkey. "The continuation of broken ties only works to harm Israel. It would be to Israel's benefit to reach a new beginning with Turkey," stated Clinton.

Referring to Palestinian President Abbas and Prime Minister Fayyad as 'the best partners Israel has had up until now' Clinton also advised Israeli officials to take steps that would strengthen the Palestinian government.

Meanwhile, the Kadima Party, which joined the coalition last year, has withdrawn from the Netanyahu-led government.