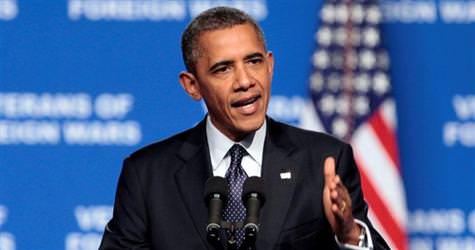 US President Barack Obama warned Syria Monday that there would be consequences if the regime of President Bashar al-Assad used chemical weapons.

US President Barack Obama warned Syria Monday that there would be consequences if the regime of President Bashar al-Assad used chemical weapons.

Syria threatened Monday that it could use chemical or biological weapons against "external aggression," but not against its own people, and dismissed an Arab League call for al-Assad to step down. "The world is watching, and they will be held accountable to the US and the international community should they make the tragic mistake of using those weapons," Obama told a gathering of veterans in Nevada.

Syria's warning drew criticism from the United Nations and the European Union. "It would be reprehensible if anybody in Syria is contemplating use of such weapons of mass destruction, like chemical weapons," UN Secretary General Ban Ki-moon said. European Union foreign ministers said the bloc was "seriously concerned" about chemical weapons, though EU foreign policy chief Catherine Ashton said there was no "immediate concern about the possibility of them being taken out or moved." Earlier, Syrian Foreign Ministry spokesman Jihad Makdisi said such weapons would "never be used unless Syria is exposed to external aggression."

Makdisi emphasized that as long as the country's 16-month uprising remained an internal affair, the weapons would not be used: "Any chemical or biological weapons will never be used during the crisis in Syria, however that crisis develops within Syria." His comments came hours after the Arab League called for more direct action against the al-Assad regime and promised safe passage for the president and his family should he resign. The EU on Monday tightened an arms embargo against Syria, blocked flights to and from the country and blacklisted two dozen people.

The bloc had instituted an arms embargo on the Damascus regime in May 2011 but has now tightened the measure by obliging EU countries to inspect ships and planes bound for Syria "if they suspect the cargo contains arms or equipment for internal repression." EU ministers in Brussels again ruled out providing weapons to the opposition or staging foreign military intervention, noting that they were "seriously concerned about the potential use of chemical weapons in Syria."

Makdisi said Syria was facing a "coordinated political campaign aimed at justifying and preparing international public opinion for intervention, on the pretext of weapons of mass destruction." He said that any chemical weapons were monitored and guarded by the army and that Syria "has previously conveyed the import of this statement to states that expressed concern regarding the acquisition and use of unconventional weapons by third parties."

Makdisi dismissed offers of safe passage for the al-Assad family. "We are sorry that the Arab League has descended to this level concerning a member state of this institution," he told reporters, saying that "this decision only concerns the Syrian people." The Arab League called for the establishment of "safe zones" to protect Syrian citizens and allow Arab and international aid organizations to carry out humanitarian work. Iraqi Prime Minister Nuri al-Maliki instructed security forces and the Red Crescent late Monday to allow Syrian refugees into Iraq, according to Iraqiya state television. Baghdad had so far refused to accept refugees.

To date, 125,000 people have fled Syria for Turkey, Lebanon, Jordan and Iraq, according to the United Nations Refugee Agency (UNHCR), EU Home Affairs Commissioner Cecilia Malmstrom said at a meeting in Nicosia. An estimated 1 million people are internally displaced, Malmstrom told a gathering of EU interior ministers. The EU was considering setting up a refugee aid plan and was boosting humanitarian assistance to help countries neighbouring Syria deal with the worsening refugee crisis.

Meanwhile, the Syrian Observatory for Human Rights reported that 42 people were killed across the country. It said that 15 bodies were discovered in Basatin near Damascus, some with their hands tied, as government forces continued to regain control over areas of the capital that saw fierce fighting over the last week.

"Syrian troops regained control of Mezzeh and Barzeh after rebels made a tactical withdrawal," activist Haytham al-Abdulah told dpa, adding that about 30 people, mainly rebels, were killed in fighting Monday.

Activists reported that about 1,000 soldiers backed by tanks carried out the offensive, which started Sunday. State television said that "government troops have cleansed most areas in the capital from terrorists." Clashes continued in Aleppo, while activists at the northern border told dpa that rebels had full control of the Bab al-Salam border crossing with Turkey and were advancing southward on Aleppo
Last Update: Jul 25, 2012 4:09 pm
RELATED TOPICS