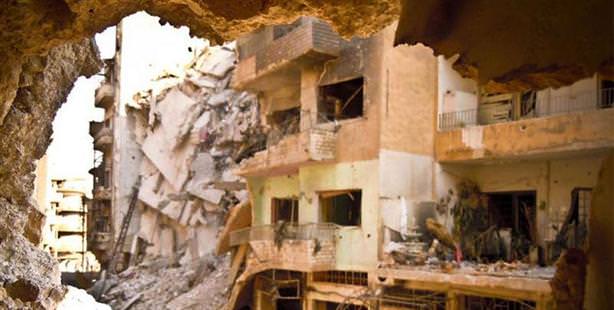 The recent death toll from attacks in city suburbs staged by military troops still loyal to the administration has reached 206.

According to the London-based Syrian Observatory for Human Rights, 113 people were killed in operations staged in suburbs of Damascus, using heavy weaponry. In addition, the Observatory has also noted that a significant number of homes have also been demolished in the attacks due to the force of the heavy weaponry.

According to the organization 39 people were killed in Deraa, nine in Aleppo, 17 in Idlib,11 in Deyru'z Zor, nine in Homs and eight in Hama, bringing the death toll up to 206, with while hundreds of people have been wounded.

DAMASCUS SUBURBS DERAA AND IDLIB ARE UNDER HEAVY FIRE

According to local sources, operations staged with mortars and cannons in the capital's suburb of Deraa have resulted in demolishing homes, leaving people trapped under wreckage. In Aleppo's Etareb district, Syrian forces are supposedly shooting off cannons at random while in Bukemal intense clashes between the Free Syrian Army and the Assad-loyal army are ongoing.

These sources explain that in Damascus' Mudamiye district, the regime is attacking residential areas with heavy weaponry, which is resulting in innocent people being trapped under the rubble of their own homes. According to witnesses in Mudamiye, Assad's forces have also massacred a significant number of people by first tying their hands behind their backs and then shooting at close range. Sources explain that Damascus' Zemelka region is also under heavy fire, while in Idlib and its surroundings attacks staged by helicopters have left a majority of the region in ruins and its residents trying to escape to safety. Sources are emphasizing the fact that operations by Syrian forces are also currently ongoing in the cities of Aleppo, Homs, Hama and Deyru'z Zor.

Foreign Minister Ahmet Davutoğlu called for more help from other countries with a growing Syrian refugee crisis on Monday and said Ankara would stress this at a U.N. Security Council meeting on Syria later this week. The number of Syrian refugees in Turkey has nearly doubled over the past two months to more than 80,000 and this weekend Turkey begun temporarily holding thousands of people on the border while they scrambled to erect shelters. Davutoğlu said last week Turkey could run out of space if the number went above 100,000 and suggested the United Nations may need to create a "safe zone" inside Syria.

Turkey will open four new camps to accommodate refugees fleeing violence in Syria by next week, the Disaster and Emergency Management Presidency (AFAD) said on Tuesday, bringing its total capacity to 120,000 people, and is making plans for a continued influx. "By next week camps with additional capacity of 40,000 will be opened. So we will have capacity to accommodate 120,000 people and are making plans for higher numbers," said Mustafa Aydogdu, spokesman for ASAD.