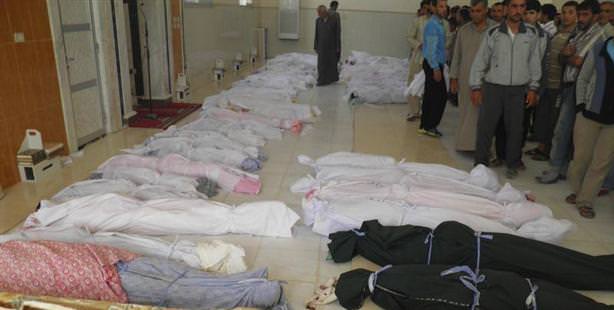 This past August, the bloodiest month in the uprising thus far, has seen a record 6,808 lives lost in Syria. The total death toll for the entire 18 months of the conflict has surpassed 29,500.

The death toll for this past August was the highest seen since the start of the public uprising against Bashar Assad began in March, 2011.

According to data compiled by the London based Syrian Observatory for Human Rights, within the month of August, which this year also included the Muslim sacred month of Ramadan, 6,808 people were killed in Syria. Founder and Director Rami Abdurrahman explains that the official records they were able to keep does not include the thousands of people that are either in jail, or their whereabouts or possibly deaths, are unknown.

According to information from the opposition's Syrian Revolution Solidarity Network (SDDA), the total death toll in Syria is 29,388. Out of those killed 2,230 were children and 2,517 women, while 979 people died as a result of torture.

According to SDDA figures, a Syrian dies every 25 minutes, whereas one is either wounded or goes missing every ten minutes. In every two minutes, one Syrian is forced to abandon their homes.
The number of wounded, arrested, missing and emigrated as a result of the civil conflict is also extremely alarming. According to the SDDA, 63,400 civilians have been injured in the uprising. Figures also show that 224,400 people have been arrested, 76,000 people have gone missing, and 226,284 Syrians have officially applied for refugee status in other nations. Records show that an additional 180,000 Syrians have escaped their nation through unofficial routes. Including yesterday's death toll of at least 132, since the start of civil strife n Syria 29,500 people have lost their lives.

Journalist-writer Abdullah Ömer, who is considered to be one of the most influential figures in the Syrian media, has announced that he has switched over to the opposition front. Ömer, who served as executive editor on a number of regime-controlled television stations such as Halebiyye TV, Halep Fadaiyye TV and Şahba Press recently announced that the media in Syria is state controlled. Ömer blamed Syrian stations of justifying the regime's atrocities rater than providing real news.

BRAHIMI HAS GIVEN UP FROM THE START

Recently appointed to fulfill Kofi Anna's position as UN and Arab League Special Envoy to Syria, Lakhdar Brahimi, announced in an interview with BBC that he is scared of the task. "I'm coming into this job with my eyes open, and no illusions," Mr Brahimi told the BBC's Lyse Doucet in an interview in New York. "I know how difficult it is, how nearly impossible. I'm scared of the weight of responsibility. People are already saying: 'People are dying and what are you doing?'And we are not doing much. That in itself is a terrible weight."

The Syrians which have sought shelter in Turkey are requesting air strikes be staged similar to what took place in Libya in order to bring down Bashar Assad's regime. Speaking to Anadolu Agency, they have said, "Assad strikes us with planes, therefore we also need to have air support."
Meanwhile, Russian Foreign Affairs Minister Sergei Lavrov recently stated that the United States is working to have Assad overthrown, while they are trying to put forth the Geneva Agreement.