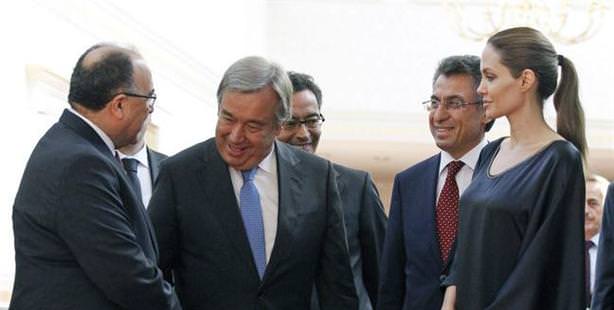 UN Commissioner Guterres, who joined Angeline Jolie of a tour of a Syrian refugee camp in Kilis, offered up a comparison to camps set up in other nations, in which he praised the Turkish government’s efforts.

United Nations High Commissioner for Refugees Antonio Guterres continued his rounds of four neighboring nations that are hosting Syrian refugees during which Guterres made a comparison between the conditions of Syrian refugees in Lebanon, Jordan and Iraq with those in Turkey and offered extensive praise to the Turkish government for their handling of the refugee crisis.

Guterres said, "Lebanon doesn't want to get involved in the camps, whereas Assad's forces are crossing over the border to bring in men. Jordan doesn't want conflict with Syrian forces. In Iraq, although the numbers are low, there is one camp set up consisting mainly of Kurds. The Syrians staying in camps in Jordan don't even have bread to eat."

Last week, UNHCR Special Envoy actress Angelina Jolie toured the camps in Turkey and expressed how surprised she was at their coordination and orderliness by stating, "I have never seen a camp like this."

SABAH has acquired details from diplomatic sources that information has been relayed to Jolie and Guterres that preparations have begun for the winter months in the refugee camps.
The UN committee was relayed the following information regarding preparations for winter:
"Turkey is unable to push conditions any further, because with the start of the school year, we have been forced to evacuate the Syrian refugees staying in school dormitories. The constructing of the container city in Kilis took an extensive amount of time. It is the best one in Turkey. However, there are difficulties with the camp in İslahiye. Turkey has purchased 10,000 blankets from Pakistan for winter. We have sent additional officers to the region to coordinate the camps. Meanwhile, the over crowdedness in Hatay seems to be decreasing in increments."

"IT'S A DIFFICULT PROCESS"

In both press announcements as well as in official meetings, Jolie has pointed out repeatedly that the situation in Turkey is much better than in other countries. When asked if additional container cities might be built in Turkey, Jolie responded by stating "It is a very difficult and long process. Furthermore, the refugees end up becoming permanent habitants," stated Jolie relaying that there were no present plans to construct further container camps in Turkey.

Guterres and Jolie also explained that religious, social and cultural preparations have also been made in Turkey for a potential further influx of refugees. According to Prime Ministry sources, In the case of Syrian Assyrian, Armenian or Christian refugees, plans have been made to set up areas designated to these groups, which will allow for a number of social facility projects such as having a church, etc. At present, there are just four Christians that have crossed into Turkey from Syria, two of which are staying at a camp, while two others are under special protection.