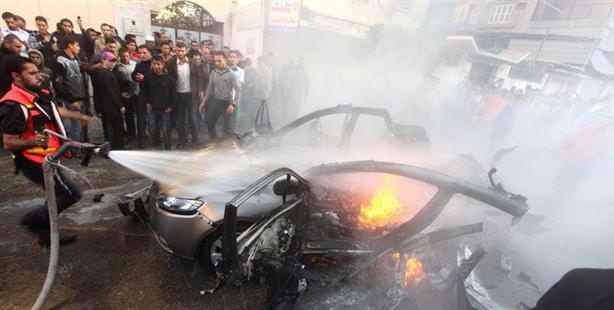 Israel launched an air strike on Gaza on Wednesday killing Hamas military chief Ahmed al-Jaabari and eight others. Already the fiercest assault in years, Israel has announced they will be widening the offensive, while Hamas says they have "opened the gates of hell."

It has been four years since Israel has staged an air attack directed at a high-level Hamas leader. With a surgical strike by Israeli warplanes yesterday, Hamas' top commander Ahmed al-Jaabari lost his life. The Israel Security Agency (ISA) also known as the Shin Bet has claimed responsibility for the assault. Even after the assassination, Israeli authorities inferred that operations may continue.

"THIS IS JUST THE BEGINNING"

Israeli Defense Forces Spokeswoman Avital Leibovitch referred to the assault as "the beginning of a widespread operation," and stated that high-level Israeli officials approved the attack on Jaabari.

The offensive spurred intense rage amongst Gazans, who flocked to the streets vowing revenge and protesting the violent strikes for hours. Hamas has announced that Israel's attack has "opened the gates to hell." Amongst the news coming in is that Israel has hit Hamas' weapons repository and also destroyed much of Gaza's longer-range rocket stockpiles. Israeli naval assault boats bombed regions along the Gaza coast.

Thirteen Gazans, including three children, were killed, the Hamas government said, and about 100 were wounded. More than 100 air strikes pounded Gaza throughout the night, and three members of a Hamas rocket crew were killed. Also among the dead were a baby and a woman pregnant with twins. Palestine responded by shooting missiles overnight and six Israelis were wounded in the strikes.

The rockets of Wednesday and early Thursday caused no Israeli casualties.

According to the information coming in, amongst the dead are three children, an infant and a woman pregnant with twins. The operation has been dubbed by Israel as the "Pillar of Defense" in English and the "Pillar of Cloud" in Hebrew after the Israelites' divine sign of deliverance in Exodus.

During a press conference with Israeli Justice Minister Ehud Barak, Israeli Prime Minister Benjamin Netanyahu said the Israeli military was prepared to expand the operation in the upcoming days if necessary and said that Israel has also prepared the options for a Gaza ground sweep.

TURKEY AND EGYPT CALLED ON FOR SUPPORT

With the risk of Palestinian retaliation to Israel's operations, hundreds of Israeli's began heading north. In Palestine, the Internal Affairs and National Security Ministry have emptied out all security headquarters as a preventative measure in light of the possibility of further Israeli strikes. The public are being prohibited from approaching checkpoints. Hospitals along Egypt's Sinai Peninsula have gone on emergency alert in order to treat the wounded coming in from Gaza. While Gaza's Palestinian Prime Minister Ismail Haniyeh administration leader has called on the Arab leaders of Egypt to hold an "extraordinary meeting" for Gaza, Hamas has made a request from Ankara, for "Turkey to use all diplomatic efforts possible to prevent further strikes from Israel on Gaza."

Israel's attack on Gaza which began on Wednesday has drawn worldwide reaction. While France's Hollande administration is calling for 'restraint, Egypt has recalled their Israeli ambassador and requested Israel put an immediate stop to the attacks on Gaza. The United Nations has also advised restraint in light of Israel's attacks.