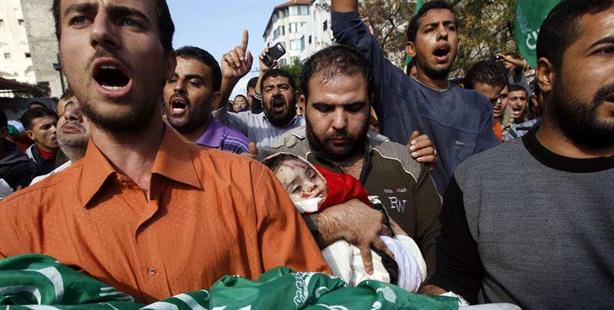 Obama and other world leaders are exerting pressure on Israel to give Egyptian President Morsi and Prime Minister Erdoğan’s call for a ceasefire a chance. Meanwhile the death toll continues to rise… Yesterday’s death toll: 22 dead, eight of which are children.

While the death toll of civilians from Israeli's assault on Gaza which began on Wednesday continues to rise so do international efforts to establish a ceasefire. U.S. President Barack Obama, German Prime Minister Angela Merkel and Italian Prime Minister Mario Monti have called on Israeli Prime Minister Benjamin Netanyahu to "Give Egyptian President Mohamed Morsi and Turkish Prime Minister Tayyip Erdoğan the opportunity to mediate with Hamas."

While British Prime Minister David Cameron has called on Netanyahu to "do everything possible" to put an end to the crisis with Gaza, England's Foreign Minister William Hague stated that he and Prime Minister Cameron "stressed to our Israeli counterparts that a ground invasion of Gaza would lose Israel a lot of the international support and sympathy that they have in this situation." Speaking on an English news television broadcast, Hague stated, "A ground incursion would make it harder to limit civilian casualties and prolong the current conflict."Hague accused Iran of fueling the conflict by supplying weapons to Hamas militants. "Iran is a country which we all suspect is a prime mover behind that, a supplier of such weaponry," he said. "There is Iranian involvement. That's why we have to keep the wider picture in mind. It's part of bigger picture which is necessary to resolve," Hague said.

The Israel Haaretz newspaper writes that international pressure is being exerted on Netanyahu to put an end to the strikes on Gaza and to absolutely avoid a ground invasion.

The White House Deputy National Security Adviser Ben Rhodes recently stated that Obama has spoken with President Mohammed Morsi of Egypt and Prime Minister Recep Tayyip Erdoğan of Turkey about the situation. "They have the ability to play a constructive role in engaging Hamas and encouraging a process of de-escalation," Rhodes said, emphasizing that what they want to see is countries harboring relations with Hamas such as Egypt and Israel offer assistance in bringing a halt to rocket strikes from Gaza.

OBAMA: WE WILL KNOW IN 48 HOURS

Discussing the latest situation in Gaza on the first day of his trip to Thailand, U.S. President Barack Obama reiterated support for Israel.

President Obama stressed that "no country on earth would tolerate missiles raining down on its citizens from outside its borders" and offered the United States' full support of "Israel's right to defend itself from missiles landing on people's homes. We're going to have to see what kind of progress we can make in the next 24, 36, 48 hours," he added.

Meanwhile, a senior Palestinian official in Gaza told the French news agency, "There are serious discussions underway between both sides and they have been able to make progress. It is possible that a ceasefire may be announced soon."

A high-level committee from Israel has arrived in Cairo to discuss a potential ceasefire. Meanwhile, Foreign Minister Laurent Fabius is headed for Jerusalem to broker a solution, while United Nations Secretary General Ban Ki-moon is headed for Egypt today to discuss the crisis.

TEN KILLED IN THE SAME BUILDING

Meanwhile, Israel is continuing its murderous rampage in Gaza. A bombardment by warplanes which took off before the sun had risen yesterday morning resulted in the deaths of 22 people, eight of which were children. While ten people were killed in a single three-story building, seven of which were members of the same family, yesterday's death toll was the highest death toll for a single day since the initial onset of the Israeli assault. According to official figures from the Hamas administration, 71 Palestinians have been killed over the last five days, and 591 wounded, including 16 journalists.