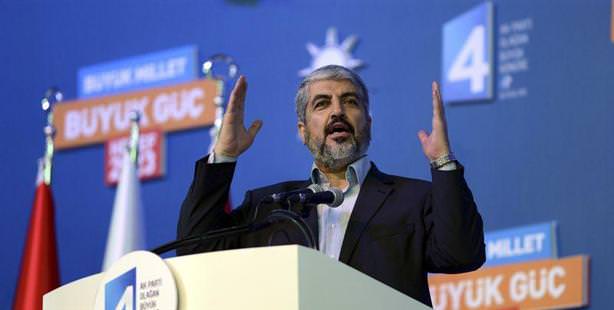 Hamas Political Bureau Chief Khaled Meshaal thanked the Turkish government and public for their efforts in ensuring a cease-fire last week between Gaza and Israel, which Hamas considers to be the losing side in the conflict.

Hamas leader Khaled Meshaal was commenting on the eight-day battle which resulted in the deaths of 163 Gazans and the successive ceasefire agreement, which brought the conflict to a halt. Explaining that the war erupted as a result of Israel's hostile assault, Meshaal stated that by heroically defending their land, the Palestinian people disappointed the enemy.

Also noting that Prime Minister Recep Tayyip Erdoğan exerted great efforts including conducting telephone diplomacy with the U.S., Meshaal went on to state, "I would like to share the behind the curtains information that Israeli officials contacted Turkey through two channels for the truce and requested the nation extend efforts to establish the cease-fire. The efforts made by Turkey and Egypt reaped results. We were in contact with Turkish officials up until the very last moment."

Stating that the nations which gained confidence as a result of the Arab Spring has rattled Israel, Meshaal pointed out that the Israeli administration was unable to garner international support. Meshaal also stated that Israeli Prime Minister Benjamin Netanyahu's entire strategy was based upon maintaining his popularity prior to the vote.

Meshaal says that Israel engaged in the war with Hamas under the notion they would be able to come out victorious, however they were wrong. "Netanyahu realized that had he gone for a ground operation his political career would be over and therefore he was obligated to except our conditions." Meshaal also noted that they are in communication with al-Fatah under Egypt's supervision and have made significant strides in reaching a compromise.