A message to Ban: “Take an initiative on Syria” 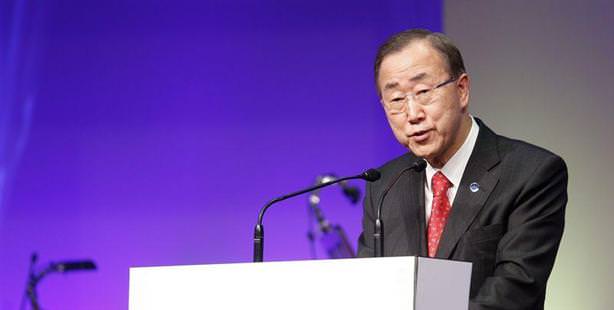 Prime Minister Erdoğan will be delivering the message, “Take an initiative on Syria” to United Nations Secretary-General Ban Ki-moon, who is scheduled to arrive to Turkey on December 7th. Erdoğan will also be requesting continued assistance for the Syrian refugees being sheltered in Turkey.

United Nations (UN) Secretary-General Ban Ki-moon will be paying a visit to Turkey on December 7th-8th to discuss the crisis in Syria. Hosted by Prime Minister Tayyip Erdoğan, Ban Ki-moon will be requested to take an initiative when it comes to the situation in Syria. Prime Minister Erdoğan will be asking the U.N. Secretary-General, "Over three million people have been displaced from their homes in Syria. What is the U.N. doing or considering doing about this? Will your new Syrian envoy Lakhdar Brahimi be making any new efforts?"

On the first day of his arrival, Ki-moon will pay a visit to the İslahiye Tent City in Hatay. The next day, December 8th, he will arrive to Ankara as a guest of Prime Minister Tayyip Erdoğan and will also have the opportunity to speak with President Abdullah Gül and Foreign Affairs Minister Ahmet Davutoğlu.

Ban Ki-moon will be delivered a series of messages and asked the following questions listed below:

We are expecting you to play an active role in mobilizing the international community to handle the crisis of humanity ongoing in Syria. As the U.N. Secretary-General, we are expecting you to be influential. Exert efforts to ensure there is no more bloodshed in Syria. Stop Syrian President Assad from massacring his own civilian public.

Will there be a new initiative made by the Syria Special Envoy Lakhdar Brahimi? What sort of steps is he planning on taking? Is he planning on speaking with Syria's new opposition?

We are expecting the aid coming in from the United Nations to continue. The number of Syrians in Turkey increases daily. Bipartite aid from nations in extremely limited.

It is important the U.N. acknowledge the decisions regarding Cyprus. The one-sided efforts made in the Mediterranean, especially by the Greek Cypriots should not remain unresponded to. It is the United Nations that could take an initiative to reach a solution. Turkey is ready to do all it can in order to reach a solution.

Tension is escalating in Iraq. We are also expecting the U.N. to play a role in this issue.