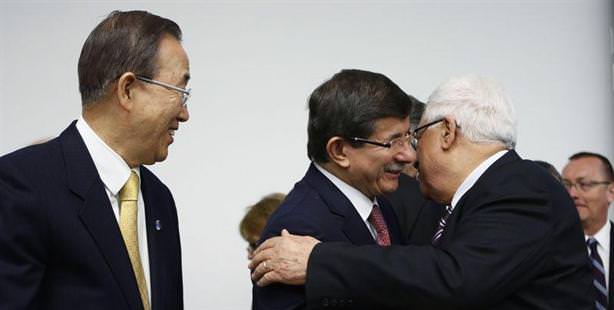 Held on the 65th anniversary of the November 29th, 1947 failure to pass a two-state resolution, yesterday the United Nations voted on a historical Palestine resolution to be granted ‘non-member state’ status which passed with 138 “Yes” votes.

As Palestine pursues the path to reaching international state recognition, yesterday the United Nations General Assembly voted to upgrade the Palestinian Authority's observer status at the United Nations to "non-member state" from "entity". The "Palestine Issue" session commenced at 22:00 Turkish time last night and was held in the United Nations' New York Headquarters. During the vote, a wide majority of the 193 member-nations supported Palestine's status upgrade.

Addressing the world from the United Nations' pulpit yesterday, Palestinian President Mahmoud Abbas called on the world body to issue its long overdue "birth certificate" and said the vote is the last chance to save the two-state solution. The historical vote saw 138 nations in favor, nine nations which voted against and 41 abstentions. Three countries did not take part in the vote, which resulted in an overwhelming UN majority granting de facto recognition of the sovereign state of Palestine.

"NO" VOTES FROM THE PACIFIC

During the vote sounds of applause reverberated in the hall as nation representatives got in line to offer congratulations to Palestinian President Abbas. Responding harshly to the vote, Israel announced that the ruling "would change nothing". U.S. Secretary of State Hillary Clinton called the ruling, "unfortunate and counterproductive," while France called on negotiations on the peace process to begin.

Being given "observer state" status grants Palestine legal, political and diplomatic authority within the U.N. In addition, the ruling also leads the way for Palestine to eventually gain member-nation status.
The vote, which was held precisely 65 years after the November 29th, 1947 rejection of a U.N. resolution for a two-state solution for Palestine and Israel, is considered to be a "victory" for Palestine. At that time the Arabs had refused to accept the 1947 proposal and just six months later, Israel was recognized as an official state.

Speaking prior to the vote, Israeli Prime Minister Benjamin Netanyahu stated, "The decision at the U.N. today will change nothing on the ground," Netanyahu said. "It will not advance the establishment of a Palestinian state; it will push it off."

AN OPEN DOOR TO THE ICC

Perhaps the greatest concern for Israel in regards to granting Palestinians the title of "non-member observer is the fact that they can now join the International Criminal Court (ICC). And other international bodies should they choose to. Palestinian says they have no plans to apply to the ICC, they only intend to establish a Palestinian state within the borders established in 1967. If the Palestinians were to join the ICC, then Israel is expected to retaliate by way of increasing its settlement area. The intense support offered to Palestine during yesterday's vote is being considered widely as evidence, "Israel is becoming further isolated in the international arena."

Foreign Affairs Minister Ahmet Davutoğlu addressed the U.N. in a historical address before the vote. "We have gathered here for correcting a historical injustice against the Palestinian people. We all believe and cherish the vision of a just, peaceful and harmonious future. For that future we should all together have to stand behind the Palestinian bid to become a "non-member observer state". Let me be clear. Our vision for justice, international order and human rights will not be achieved until the moment we actually see the flag of the State of Palestine standing side by side with ours, as a full member of the United Nations. The recognition of Palestinian statehood is not an option but a moral, political, strategic and legal obligation for the international community. And I want to speak to all Palestinians from Al Khalil to Bethlehem, from Ramallah to Khan Yunus, from Jerusalem, Al Quds Sharif to Gaza; We, as Turkey, will stand by you forever," stated Davutoğlu. Concluding his speech, Foreign Minister Davutoğlu stated, "I call on all UN members to fulfill their long overdue responsibility towards the Palestinians. And the State of Palestine must be taken out of the shades and given its rightful place under the sun."

Prime Minister Tayyip Erdoğan was the first to congratulate Palestinian President Abbas once the ruling passed. Speaking from Foreign Minister Davutoğlu's telephone, Erdoğan congratulated Abbas and reminded of Turkey pledge of support to Palestine, delivering the message "We are by your side." Abbas in return thanked the Turkish public via Erdoğan. President Abdullah Gül also paid a call to Abbas to offer his congratulations.