A Libya-style intervention in Syria 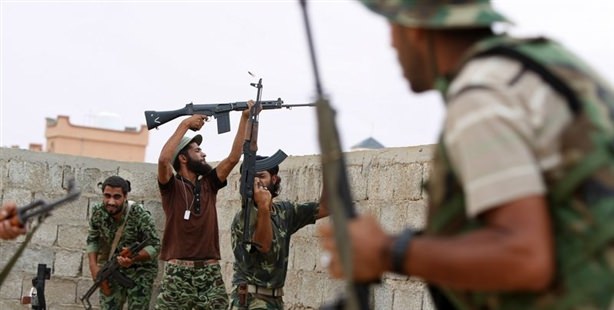 An international coalition of military officials from England, Turkey, France and Jordan has convened in order to discuss how to assist the Syrian opposition. The option of a Libya-style intervention is gaining serious ground.

Last week, military officials from Turkey, France, Qatar and the United Arab Emirates as well as a three-star American general came together in a meeting chaired by British Chief of Staff Sir David Richards to discuss how the international coalition can assist the Syrian opposition with training and offer supplementary military power.

According to the U.K. daily The Independent, this initiative, led by Britain, is currently "drawing up plans to provide combat training for the opposition and support them with air and naval power."

The plan supposedly also involves establishing training camps within Turkey. However, sources state that the fact that land and naval options are being put to the table means the groundwork is being laid for a Libya-style intervention. The Independent newspaper writes that the international coalition is deliberating on a number of potential plans and Britain is working closely in negotiating with the Syrian opposition.

While diplomatic efforts are ongoing in an effort to reach a solution to the Syria crisis, the Iranian administration has prepared a draft of their own. Accordingly, there would be absolutely no military intervention. Opposition forces would no longer be given additional arms and the nation would go to an election as soon as possible.

The United States and the European Union are on the verge of officially recognizing the main opposition structuring, the Syrian National Council. Meanwhile, U.S. Secretary of Defense Leon Panetta has announced that the threat of Syria using chemical weapons has "leveled off." At least 75 people were killed in clashes in Syria yesterday, while the total death toll has amassed to 60,000.

The United Stated has added the al-Nusra Front, which has been fighting against Syrian forces in the north for months now, to their list of foreign terrorist organizations. Officials state that the al-Nusra Front's ties to Al Qaeda's Iraq wing are the reason why the group has been blacklisted. The al-Nusra front is stated to have staged over 600 attacks, have played a role in the deaths of hundreds of civilians and continues to become empowered in spite of the pain and suffering of the Syrian public.

According to the Syrian Revolution General Commission (SRGC), Syrian forces attacked a village in Hama, killing 130 people, a majority of which were Nusayri families.

The total number of Syrian refugees forced to find shelter in neighboring nations has been recorded at 500,000. Out of that total, 136,319 Syrian refugees are in Turkey. In another development, Ecuadorian President Rafael Correa has stated that Ecuador is willing to consider the option of providing Assad and his family asylum, if requested. Last week, Syrian Foreign Affairs Minister Jihad Makdissi left Syria on leave by permission for three months from President Assad supposedly and has not deserted.