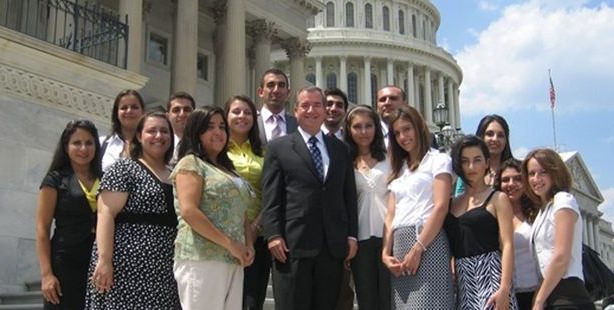 Just a few days ago, the United States Congress implemented a mandatory change in the House Foreign Affairs Committee Chairmanship.

According to Republican Party Congressional procedures (since the Republicans control the House of Representatives), Congresswoman Ilena Ros-Lehtinen, who has served as the House Foreign Affairs Committee chair since 2011, had to step down having fulfilled her term of duty (because she served 2 years as chair and 4 years as ranking member). She will remain in the Congress, but not in her influential position as Committee chair. Replacing Ros-Lehtinen, who, with the exception of the Cyprus issue, had exhibited a very close stance to Turkey (and did not allow the introduction of the Armenian Genocide resolution), is Ed Royce, who is well known for his anti-Turkey positions in the U.S. House of Representatives. The appointment of Ed Royce to lead the House Foreign Affairs Committee was greatly celebrated by the Armenian lobby.

Who is Ed Royce?

Royce, a Republican U.S. Representative for California's 40th congressional district, has been serving in the House Foreign Affairs Committee since 1993. Royce, who is known for actively lobbying in his congressional district as well as harboring close relations to the Armenian lobby which both donates to his campaign and secures votes, is also the Republican co-chairman of the Congressional Armenian Caucus, and a member of the House Hellenic Caucus. According to many specialists, Royce was the least favorable candidate for Turkey that could have been appointed to the position. The Armenian lobby exerts great influence over his position when it comes to issues pertaining to Turkey.

When looking at Royce's achievements up until now, the first which stands out is the Return of Churches resolution draft presented to the House of Representatives in 2011 which was unfavorable to Turkey. It was Ed Royce himself who introduced the resolution text in a manner decisively against Turkey, by emphasizing the notion that Turkey does not respect Christian rights. Royce's anti-Turkey stance is not limited to this one resolution however as he is known for being one of the most prominent figures to oppose weapons sales to Turkey.

Is the US Congress this important?

Last week, we posed this question to political analyst Mark Meirowitz. According to Meirowitz, "The US Congress is vitally important because of the American system of separation of powers and checks and balances. Nations which have strong influence in the US Congress are potentially better equipped to protect their interests especially as they relate to bilateral relations with the US. While the Turkish Prime Minister and the Turkish Government have maintained significant influence with the US President and the US State Department (also note the close and cordial personal relationship between PM Erdogan and President Obama), in Congress it is another story altogether, in that Turkey's influence there has certainly had its ups and downs. With Royce's appointment as Chair of the House Foreign Affairs Committee, we may see some problems for Turkey in the next Congressional session".

Meirowitz says that Royce's appointment to lead the House Foreign Affairs Committee is very important in terms of Turkey comprehending the importance of the Congress itself and placing emphasis on efforts to this effect. He said that we could see the possibility of the reintroduction of an Armenian genocide resolution in the House Foreign Affairs Committee in the upcoming session of Congress, as well as further activity concerning Cyprus, which has been a somewhat dormant issue, but with the discovery of valuable resources, could heat up as a big issue. As for the Armenian Genocide resolution, even if passed only by the Committee and not by the entire House, it would still send a very problematic message to Turkey and could interfere with, or even rupture, US-Turkish relations, as occurred in 2010 (when the Committee passed the Armenian Genocide Resolution, but the resolution failed to be passed in the entire House). One bright spot for Turkey, Meirowitz added, is that Congressman Howard Berman, the architect of the Armenian Genocide resolution in 2010 when the Democrats controlled the House, was defeated for re-election in November and will not be returning to the House (and will cease to be a ranking member for the minority Democrats on the House Foreign Affairs Committee). The combination of Royce and Berman (as Chair and Ranking Member of the Committee) would have been catastrophic for Turkey.

Emphasizing that from a lobbying standpoint, while having gained U.S. Presidential support is extremely important; Meirowitz says that it is crucial to not become copmplacent believing that since you have the U.S. President standing behind you, you have garnered the support of the entire United States government. Based on the principle of the separation of powers, if the U.S. Congress is neglected, the President's support could be sidelined or overshadowed

According to Meirowitz, President Obama might have the best of intentions to offer Turkey further support, however he might be unable to persuade the Congress on issues of importance to US-Turkish bilateral relations. Further, since the House is under the control of the Republicans, the President, a Democrat, might have limited ability to dissuade the House from taking actions against Turkey's interests. Members of Congress, while listening to the President's concerns related to foreign policy would focus on their own election campaigns' lobbying efforts and the concern of reelection and would act accordingly. The Turkish lobby needs to continue to devote its efforts to work with every single member of Congress to influence Congress members at a local political level," states Meirowitz. Meirowitz acknowledged that such efforts are already underway full speed, through the work of the Turkish Coalition of America and the Turkish-American community, he added. The local grass roots activities are crucial, he added, noting former House Speaker Tip O'Neill's comment that "All Politics Is Local". He also noted that the Turkish caucus in the House had over 150 members in the last Congressional sessions, a significant accomplishment.

He also said that "the successes of the Armenian, Greek or Israeli lobbies in the US Congress are very significant and should serve as a lesson for the Turkish-American community". It is clear, he added, that Turkish Americans can replicate the achievements of these other lobbies by continuing, as they are already doing, to focus on working at the local, state and national level, to build support for Turkey. Part of this effort should include communicating to the US leadership about Turkey's importance in the region where, for example, Turkey has been in the forefront, standing with the US, on the Syria crisis and other regional and global issues. The point to bring home to Congress members is that the US needs Turkey as a reliable ally through the inevitable chaos that will develop in the region and that members of Congress should avoid passing resolutions (like the Armenian Genocide Resolution) which could upset the close and vital relationship between the US and Turkey., adds Meirowitz. The US-Turkish bilateral relationship, he continued, is managed by the State Department and the President, and there are too many vital regional and global interests at stake for Congress to pursue actions which will damage this bilateral relationship. A such, he noted, the new leadership of the House Foreign Affairs Committee needs to proceed cautiously and avoid taking actions and introducing resolutions which will be perceived by Turkey as the actions of the entire US government, when in fact, this would be only the action of one committee of one branch of the government pursuing its own narrow political interests, he said.
Last Update: Dec 18, 2012 10:00 am
RELATED TOPICS