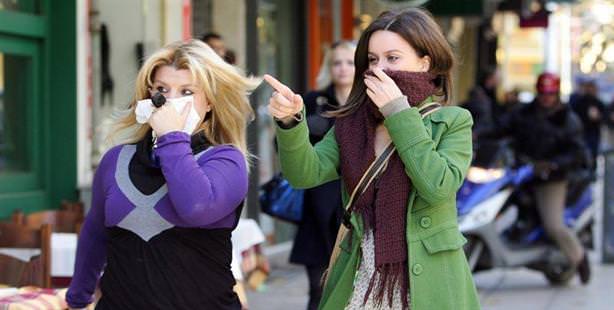 As our neighbors suffer the deepest economic crisis in its history, with increased taxes and price hikes on heating oil Athenians are now reverting to burning wood in heating stoves. The Greek capital is currently embedded in smog resulting in a potentially dangerous air quality in Athens.

It's night time here in Athens as I head off to the city center on my motorcycle. Even though temperatures are at ten degrees Celsius, for Athenians, which are unused to the chilly weather, this means "Siberian cold."

I detect a distinct smell as my throat burns. I cough from time to time and tears stream from my eyes. I am headed to the highest peak of Lykavittos in the city center. Athens is undergoing a visible change as a city which used to have sunny skies following any given day of harsh weather.

The view is reminiscent of Ankara in the 1970's and Athens in the 1980's. There is a thick layer of smog over the metropolis. The revisiting by Athens to this level of air pollution 30 years later is a result of the government's additional taxes on heating and natural gas in an attempt to fill the state's cash register in this economic crisis. With salaries dropped for the majority of Athenians, citizens are now seeking out any means of economic savings. When diesel prices, which were at 0.50 euros a liter in 2009, hiked up to 1.40 euros a liter, the city's residents began to revisit a more traditional style of heating by way of burning wood and coal in heating stoves.

The government's additional taxes on diesel gas has only resulted in halting sales as Athenians shift towards more conventional methods of heating with stoves and fireplaces and as a result the nation's tax revenue has remained far below the anticipated 1.1 billion euros.

Price hikes on electricity has made electrical heating also an undesirable option and instead Athenians are now filling their fireplaces or what used to be 'decorative' stoves left over from generations past as the 'wood burning culture' was abandoned in the cities and left to the villages, with anything they can find, including all sorts of wood, timber and even painted doors and window frames. According to specialists, when this sort of wood is burned without proper expertise, it can release dangerous particles that are harmful for both human health as well as the atmosphere.

A RETURN TO STOVES AND FIREPLACES

Experts say that a fireplace or stove is only capable of heating 12 percent of a home. This means that not only did the government fail in reaping their desired result from tax hikes, but those who are choosing to burn wood in stoves instead of purchasing fuel are now not only still freezing but they are also creating air pollution. Meanwhile, there is also a rise in fuel smuggling.

The current demise in air quality in Athens is now being closely scrutinized by the European Union. According to EU norms, the acceptable level of carbon monoxide should be between 35 percent and 50 milligrams. In some areas of Athens this rate has soared to 250 milligrams. Should the air pollution continue to remain at this rate, it would not be a great surprise if Greece may soon be also faced with a heavy financial fine from the EU Commission.