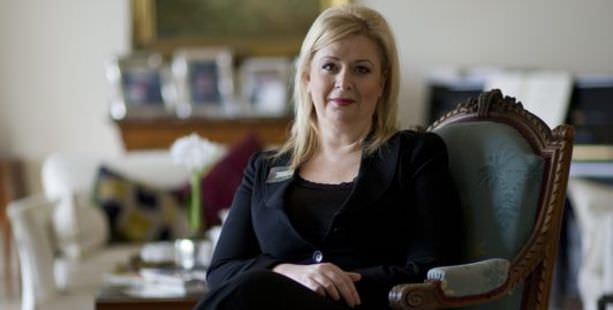 Yaser Arafat's wife Süha Arafat says it was difficult being married to Yaser Arafat, however it is even harder now that he’s gone. “We are honored to bear the Arafat name, however if I had known what I would have to go through, I wouldn’t have married him.”

Süha Tawil Arafat is the young and beautiful wife Arafat kept secret after marrying on July 17th, 1990. The day they eloped was Süha Tawil Arafat's 27th birthday. She was 33 years Arafat's younger, a Christian and looked more British than Palestinian with her long blond hair. She has a daughter with the late President of the Palestinian Authority who is now 17 and named Zahwa.

Süha Tawil Arafat shared details of her life with and after Yaser Arafat with SABAH.

Süha Arafat says she has lived two lives. One in which she was a Palestinian Christian from a bourgeoisie family who studied at a convent in Jerusalem. Her second life began when she took on the Muslim religion and married Palestine's legendary leader Yaser Arafat.

"My childhood and my youth were my first life. Arafat became my second. Our daughter is proud to bear her father's name, however it is an extremely difficult life. My life with him was hard. However, my life without him is even harder. It is as if I am walking in a field covered with mines and I have no idea when one will go off. We were married for 22 years; however it felt like it was 50."

I HAVE WITNESSED ALL SORTS OF SCHEMES

"Yes, it was my fate," states Süha Arafat, who lost her husband on November 11th, 2004. "I believe that our fate is written when we are born. I believe in the Koran. You cannot change your life. My joint destiny with Arafat started long before, in 1986-87.

I was engaged to a French legist at the time. Then I fell in love with Yaser. We got married in secret in a religious wedding in Tunisia. Our vows were held in separate rooms and I didn't even wear a wedding dress. My mother was against the marriage. She got on a plane and came to Tunisia and argued with Arafat. Now I understand what my mother was upset about. If I had known what I would have to go through; I definitely would not have gotten married. I was with a great leader, but I was also all alone. I lived intrigues and schemes just like Hürrem Sultan (wife of Suleiman the Magnificent). When I watch the show with my daughter, she sometimes asks me if it reminds me of myself. I tell her to stay away from politicians. When Arafat and I got married, everyone believed that Arafat was theirs. I cannot allow my daughter to go through what I have gone through.

We never had a family life… At 25, I fell in love with the charismatic leader of the Palestinians. He told me he had only ever fallen in love twice, once with Nada Yashuriti, who was killed in Beirut and the other, which is me. Just think, a very important leader comes and tells you this, of course I was influenced. However, there was endless gossip. He was a 58-yar-old man. He had had a lot of experiences. He was so charismatic. I was in love with him. Even if it was Yaser Arafat, you can't live with a man you do not love. If your chemistry isn't right, then you can't spend 22 years together. I come from a rich family, I didn't need anything. My father was a banker and my mother was a very important activist in my country. My mother's father was also one of the richest people in Palestine. When I began living with Yaser I was faced with all sorts of problems. I had to stay in locked places due to security and was constantly moving from one place to another. I didn't know what to do or what I could say. You cannot talk on the phone. My life was nothing like what it appeared to be. A man in such a position has a number of enemies, his number one enemy being Israel of course."

"Once you start, you cannot stop. I told him, 'This is a horrific life, it isn't fair.' I know there were a lot of women that wanted to marry Arafat. However, it was my fate and I cannot do anything about it. I tried to leave him hundreds of times, but he wouldn't let me. Everyone knows how he wouldn't permit me to leave. Especially those in his servitude, they know very well what it was like.

Yes, I am regretful. Even when he was with me, I was forced to defend myself. I was slaughtered by gossip against me. What they would say didn't even seem to be about me, it was as if they were talking about someone else. It actually all began due to the uprising against Israel. Yaser was fighting against the strongest lobby, media and nation, in other words Israel. I was the weakest link. We are proud to bear the Arafat name however we are also pained by it daily. Even if I regret my marriage I have no other choice than to except reality," says Süha Arafat.

The wife of the Palestinian Authority President, who died in Paris in November of 2004, says she isn't considering remarrying although it may be the easy way to go. She says she is now focused only on her daughter's education.