The world’s most racist bus line 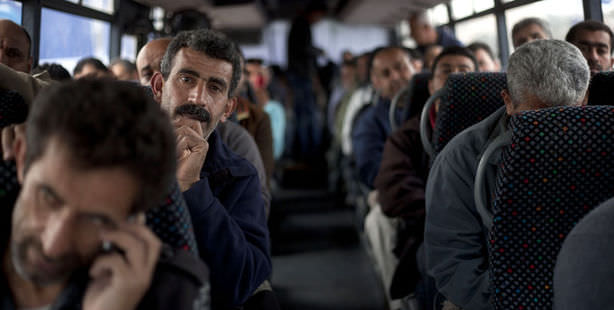 Israel's Ministry of Transportation has now forbidden Palestinian workers from riding on their public bus lines from the West Bank to Tel Aviv. Instead, the ministry has launched two bus lines that will be solely used by Palestinian laborers.

This new procedure, which was initiated with bus lines starting from the West Bank city of Qalqilya, was announced to the public through state-distributed brochures. The Transport Ministry said the two new lines would "improve public transport services for Palestinian workers entering Israel" and replace pirate buses charging them "exorbitant prices".

Palestinians, however, feel the new lines are yet an additional form of discrimination and say that fares are higher than they are for normal public buses. With this new process, Palestinian laborers will be transported from the West Bank to Tel Aviv without having any contact with Israeli Jews. It has been stated that increased tension between Jewish settlers and Palestinians may have influenced this recent decision.

This new procedure embarked upon by Israel has drawn reactions worldwide. International organizations against the occupation are drawing comparisons to this recent move to transport Palestinians separately to the segregation against African-Americans in America in the 1950's, when blacks were forbidden to sit in the front sections of buses. The same circles are saying that the placement of solely Arabic writing on the sides of the bus was also a move motivated by 'racism'.

Palestinian civil rights organizations have stated that in recent weeks Palestinian travelers aboard public buses travelling between the West Bank to Israeli cities have routinely been subjected to degrading and physical interference.

Although the move has received international backlash, there are some travelers that are pleased by the new process of separate bus lines for Palestinians. Some Palestinians say they believe this new process will make transportation more comfortable for them.